So we’re going to go sit in on a panel discussion this evening called When Your Neighbor is a Stranger. (Warning, we were advised that registration has already ended so the form that that link leads to may not be valid today.)

We’re not really sure what to expect, since this isn’t the sort of thing we do very often, and since discussions about race can vary wildly from the informative and productive to the banal and dull to the ridiculous and melodramatic. We’re hoping that this one is the former.

At any rate, it’s good to see that many of the civic organizations in the city are at least trying to facilitate a conversation about race through the lens of post- George Zimmerman coverage, but the event’s title has had us thinking about our actual neighbors, not just our metaphorical ones. 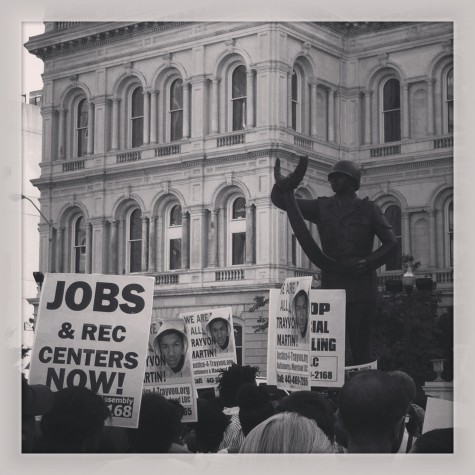 Tonight’s discussion picks up where the rallies left off.

We’ve owned the Chophouse for a little over four years now. And we were purposefully slow about getting to know our neighbors. We figured that we’ve bought in and we’re not going anywhere, so there was plenty of time. Four years later we still don’t know all of them, and frankly we’re not sure we need to. We’re native to Baltimore, and after living in many different rowhouses and apartments we definitely believe in the axiom that good fences make good neighbors. When your neighbors are so close to you physically, it’s important to know when to mind your own damn business.

And then there’s the fact that we live east of Greenmount ave. As this census map shows, Baltimore is still highly segregated, and Greenmount/York Rd is a very stark dividing line which also contains many physical barriers as described in this very excellent blog post written by another local resident with circumstances similar to ours.

Race aside, we haven’t got a whole hell of a lot immediately in common with our neighbors. Most of them are either raising families or getting on toward senior citizenship. We might be a better fit demographically in a Mount Vernon condo or a house in Fell’s or Canton, places frequented by younger, childless types but here we are.

There’s two other white households on our end of the block, in what could reasonably be considered neighboring houses. One is an old lady who’s a busybody and a gossip and who will harangue neighbors for 10-15 minutes at a time. The other is a few renters, one of whom we actually met not as a neighbor but through an online dating site. Instead of just coming over to hang out on the porch or walk over to One World Cafe for drinks her idea of a good first date was to ask for help going door to door handing out community newsletters, which we declined to do.

So now we avoid both those neighbors.

We’ve got a few good neighbors, particularly the guy next door who’s also single and living alone, and the guy across the street who bought last year and isn’t shy about coming over to chat, often bringing an extra beer with him. The older guy at the end of the block.

But as for the rest of them it might be best to keep our distance. Folks around here aren’t without their problems and in particular where there may be issues with drug activity or alcoholism it can be best to stay on nodding and waving terms. And then there’s the time that a neighbor asked to borrow $10. No big deal and he paid it back on time, but the next week he needed $20. Took a little longer to pay that back.

But then the next week it was another ten, and we hated to have to say no. Hated to have to look him in the eye and lie and say ‘Sorry, can’t spare it.’ But we can’t be the block’s shylock, you know? Can’t let other people’s problems become our own. As much as we might like to know our neighbors a bit better by this point, we also see the wisdom of keeping our fences mended.