If you have any appointments or anything you have to be strictly on time for you should probably go ahead and reschedule that right about now. If you live inside the loop, you should plan on staying inside the loop until at least 2pm and the later the better. If you want to drive anywhere near the course, inside or out, just don’t bother. If you need to sneak through by bicycle or on foot, that is usually possible. The MTA hasn’t made any announcements about transit during the race because of course they haven’t. They are terrible.

Anyway here are the routes for the marathon, half marathon and 5k race. As near as we can tell it is the exact same route every year, so whatever you remember from last year will probably be exactly the same this year. 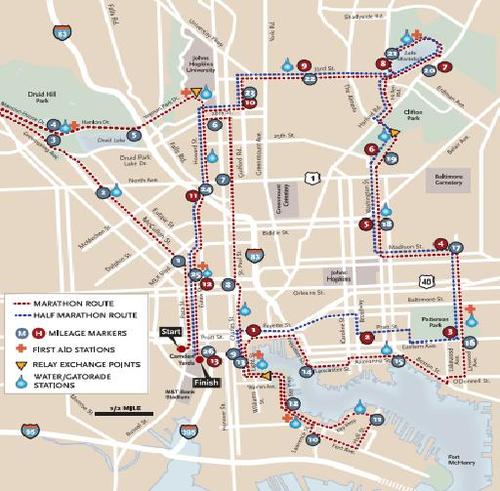 Take a close look at each map and see how you may be affected. Keep in mind that every street closure affects traffic for 2-3 blocks in either direction, so it’s not like if Charles is closed you can just cruise right up Calvert or Park ave. They will both be a mess. These maps can also be found in PDF form on the running festival’s website under the ‘race info’ tab, along with street by street listings.