Back in May we did a post about new music in Baltimore featuring some of the more interesting bands putting out recordings in town right now. One of the bands we featured in it was Modern Girls, a down-tempo indie/electronic act who impressed us quite a bit when we found their Bandcamp site.

Today Modern Girls’ keyboard player Micah Huerta joins the Chop for a brief interview to let us know a little more about the band, who release their debut self-titled LP tonight with a show at the Windup Space. Us and Us Only and Infinite Honey round out the bill. 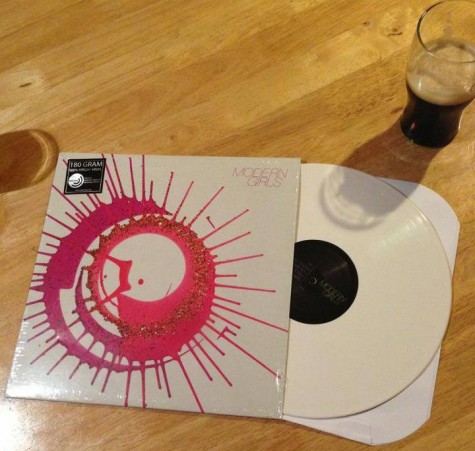 Modern Girls’ debut LP will be available on white vinyl for the first time at the Windup Space tonight.

1. Hey Micah, thanks for taking the time to talk to the Chop. Why don’t we start by telling us who you are and how you came to form a band.

When we play live the lineup is Micah Huerta- Keys, Eric Bloodsworth- guitar & vocals and David Rosario- drums & vocals. However when recording, everybody does a little bit of everything. No one really has a set role.

Originally I met Eric while I was recording his old band, Park Police in 2008. A few months later, we ended up playing in a band called The Red Vines together, and as the project was taking a break we talked about starting our own project that included electronic instruments. We shared demos of stuff that we each had been working on, then collaborated and wrote a few songs together. We have been writing together ever since.

Tonight’s record release show is actually your first live appearance as Modern Girls. Isn’t that a bit of an unusual way to go about things?

Yeah it is a bit unusual. In a way recording the album kind of saved the project. When we first got together we were also working with Billy Tiedeken from Among Wolves and trying to go the more traditional route of writing songs together that we could play as a band. We had some success, but overall is was a bit frustrating because we were still learning how to deal with our equipment. We were 3 musicians who had only played ‘organic’ instruments in the past. I think in a way we lost a lot of steam at times dealing w/ MIDI issues and shit like that, and so the project just kind of wavered.

Around about that time Billy got married, had a kid, and Among Wolves was really busy and so it kind of evolved into Eric and I hanging out and working on our demos. At some point we just made a decision to make a record, because it was a way to keep things moving forward. It wasn’t until we had sent the record for pressing that we realized we then needed to figure out how to play a live show. We then put an ad on Craigslist looking for a third member and got really lucky that the first guy we met turned out to be our drummer, David Rosario who we gelled with right away. David was playing in a hardcore band but looking to start his own electronic project, so it was a perfect fit.

When we first heard the record, it came off a lot more polished and conceptual than most indie debuts; like something that was put together deliberately and there must have been a lot of stuff that didn’t make the cut. Can you tell us a little about the process of putting the record together?

When we first started working on the record we had about 4 or 5 complete songs and a ton of partial songs and bits and pieces. The first thing we did was go through all that material and determine what we could finish, and along the way we wrote a few more songs that just kind of ‘happened’. But a lot of material got left behind. Who knows, maybe we’ll use it down the road?

Once we felt we had the right songs for the record, Eric and I re-recorded most of the material and then spent a couple months mixing in my home studio. I know that seems like a long time, but we also enjoy a good meal and good wine, so some of our sessions got started a little late.

What bands or musicians would you say have had the heaviest influence on this band, and to whom would you compare the Modern Girls sound?

Our music taste is all over the place, but with respect to Modern Girls, what seems to surface the most is 70′s psychedelic, 80′s alternative and 90′s hip hop. I know that’s covers a lot of ground but this is what we grew up listening to. People seem to associate us with the whole chillwave thing. We’ve also gotten the comparison to New Order and Air.

Modern Girls is kind of unique in that you make electronic pop music, but it’s decidedly not geared toward dancing. Care to comment?

It’s funny you mention this because when we first started the project our idea was to do a disco punk kind of thing, similar to LCD Soundsystem or Hot Chip. As we started writing music and sharing ideas though, the stuff we seemed to gravitate to just happened to be the slower, more psychedelic stuff. We do like music that is danceable and we’re not ruling out more uptempo material in the future. In general it’s always been our opinion that we should just write music as it comes, rather than to try and make it fit into a certain genre. I think that also comes through on the record.

Now that the record is out and the first show will be out of the way tonight, what’s on the horizon for the next 6-12 months?

For the near future we’re looking to play more live shows, mostly around the area. No plans to tour anytime soon, but if the opportunity arises we certainly will consider shows outside of the area.

We have a handful of strong songs left over from the first record, and have started the beginnings of several more since so we should be able to get another full length out in the next year or so. Not sure we have a theme or direction yet. Just want it to sound great.