That’s not entirely true. Actually there’s been a lot going on in the news this week between the Supreme Court, Sylvio Berlusconi going to jail for bunga bunga-ing underage prostitutes, The trial of George Zimmerman, Nelson Mandela taken sick, oh… and our distinguished madame mayor sipping French Martinis poolside in Las Vegas while 20 people were shot and 8 killed on the streets of Baltimore last weekend.

But over and above it all is Edward Snowden. And this global game of Where’s Waldo is basically what the coverage of the NSA leaks story has come to. So we made this graphic for you. Click on it for the very large size and see if you can find Fast Eddie! 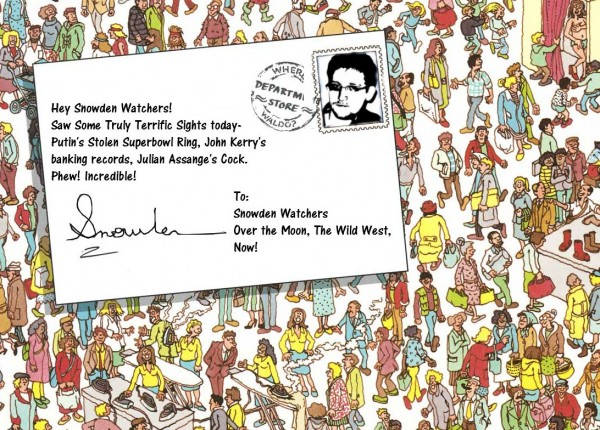 As usual, the Baltimore Chapter of Drinking Liberally will meet tonight at Liam Flynn’s Ale House to discuss Snowden and everything else in and outside the news. Meetings are free to attend and open to liberals of all stripes.

It’s also worth noting that DL is looking for a new home. The ideal bar will be able to host a group of 12-20 twice a month. It should be quiet enough to chat but lively enough to mingle. It should be central and not too difficult to park. It should have some food options and affordable beer, preferably in pitchers. Our vote is for Mick O’Shea’s. If you’ve got any suggestions for good Baltimore Bars for big groups, feel free to post them in the comments.