The Chop made our first-ever trip to SoWeBo fest last weekend. As we’ve mentioned before, crossing MLK is to us like hopping over the Berlin Wall into an entirely different city. Being From East Baltimore and eventually settling in North Baltimore, we’ve hardly ever had any reason to go into west side neighborhoods, and even less since the demise of spaces like the Loft and the Sushi Cafe.

But when we got over there the festival itself was pretty much exactly what we expected it to be, namely some music, some food, some beer, and a whole hell of a lot of Baltimoreana. In our estimation more than half of all the vendors were carrying some sort of Balto-centric wares. There was the typical proliferation of Mr. Boh and Oriole Bird t-shirts and no shortage of paintings and photographs representing the best and worst of city life. There’s absolutely no doubt about it- over the last several years people around here have gone absolutely nuts with seeking out Baltimore ‘authenticity’ and expressing local pride.

But take it from the Chop: there is nothing but nothing more Baltimore than South Carey. 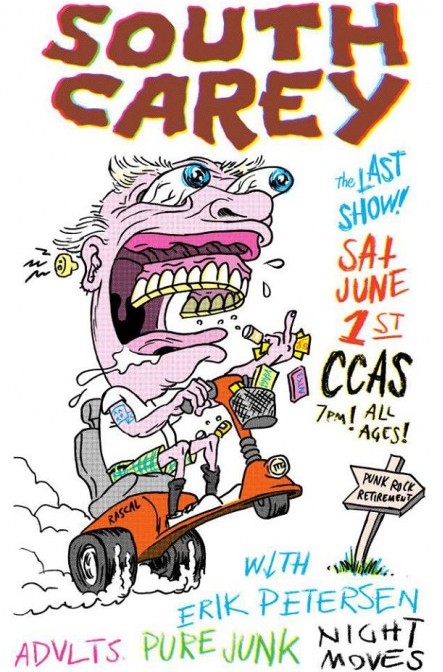 Listening to South Carey (yes, named after the street they grew up on) is like Baltimore to the Nth power. It’s like eating a heroin laced crab cake on top of the Orioles’ dugout with Barbara Mikulski while John Waters films it. And tomorrow at the Charm City Art Space they’re going to do the most Baltimore thing it’s possible to do: retire, and spend the rest of their days sitting out on the stoop.

It’s the end of an era in an era of ends of eras. South Carey represents one of the last remaining bands from the early days of the Charm City Art Space. First it was farewell to Farewell Hope, then the Spark flamed out, followed by the Ruin of Ruiner and the demise of Double Dagger. The New Flesh got old, Never Enough had enough, and Downside Risk went down too. South Carey going South is more than just a local band playing its last show. For a lot of us, it means recognizing a new time and a new generation of creative talent in Baltimore as we nod approvingly from our place in the Old Punks’ Home.

But that’s not to say that South Carey isn’t going out with a bang. They’ve lined up a killer bill to send themselves off featuring longtime CCAS denizen and honorary Baltimorean Erik Petersen, along with Pure Junk and Adults, who are two of this blog’s current favorites and local screamo-throwback outfit Night Moves.

We’re not going to be able to make it to the show tomorrow, and more’s the pity for it. If you can’t make it either (or even if you can) we suggest you click over to South Carey’s Bandcamp site, where they’ve got a few new tracks up. In addition to September’s Good at Doin’, Not Good at Doin’ Well and their Record Store Day release Pure Vanity, They’ve also just released the 2-track, name-your-own-price Retirement Gift. Smart money says download all three and call it an even ten bucks. After all, these guys could use the bread. Tomorrow they claim their gold watches, and there’s no 401k’s in punk rock.