We’ll admit that we did have a slight moment of trepidation when we heard the place described in terms of ‘blue collar food’ and ‘white collar execution.’ That kind of thing seems all the rage right now. There’s no shortage of new restaurants in Baltimore, and many of them come across as way too gimmicky- pushing concepts and menu items that border on the absurd. There’s nothing absurd or gimmicky about the Food Market. They even took our advice and smartly opted for a soft opening.

It all starts with the name. Chef Gauss and his partner Elan Kotz have some legit Baltimore credibility, so we’re assuming that they just named it the Food Market because they were clever enough to realize that that was what people were going to end up calling it anyway. 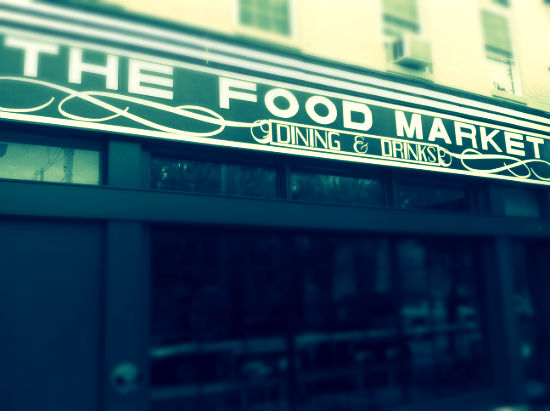 The next big clue comes when you look at the menu. It’s not so much what’s on the menu as what’s not there: namely 2-3 pages of fanciful prose about how all the ingredients are local sustainable organic fair trade bio-diverse yadda yadda and the decor is reclaimed-this and artisan-made-that and blahbitty blah blah blah. You know what this restaurant’s mission statement is? They don’t have one. Their mission is to trade meals for money.

The truth is that the Food Market doesn’t need to blow smoke up the customers’ asses because when the food hits the table its quality is readily apparent. In fact, it’s apparent even before that. The open kitchen stretches along the restaurant’s entire back wall and allows a better view of what goes on behind the scenes than any place we’ve ever been. It’s abutted by a long servers’ station that’s highly visible and hospital-clean. From where we were seated we could see every dish that came through the window and this is definitely the kind of place where you’ll be sneaking lustful sidelong glances at neighboring diners’ plates.

Of course, those glances only last as long as it takes for your first course to be laid before you. In our case it was a bowl of thick-cut deep fried crab chips and the Amish soft pretzels with beer-cheese fondue. There was as much planning and care in just these two small items as some places put into their entire appetizer menus. The steamy warm pretzels were fresh and chewy, and the beer-cheese fondue was rich and flavorful and clearly not made with the stuff from the Bum’s Cooler. The crab chips were crunchy and delicious when dipped in anything, whether it was the mustard they came with, the sweetened whipped butter in our basket of focaccia, or the avocado and ricotta that came later in the meal. If we’re being honest though, they were entirely too salty.

The Food Market’s menu is divided into sections labeled Little, Small, Big and In-Between, but of course these labels are somewhat subjective. We didn’t think those appetizers were particularly little- they were fairly generous, actually. And when the Republican ordered the steak tacos (2) from the Small menu she declared them to be quite big enough for a meal.

It’s entirely possible to build any size meal you wish from the menus, or do as we did and order something Big. Our vegetable messtray did in fact arrive on a large steel mess tray, and looked exactly like what school lunches would be if Michelle Obama and Jamie Oliver had their wildest dreams fulfilled. Pasta in olive oil and coarse scratch-made pesto, thin spears of asparagus with just a touch of grill char, gently seasoned crushed tomatoes, ricotta topped with a balsamic reduction, and spongy, crusty bread on the side.

Was it good? Normally in a restaurant review this paragraph would be filled with vivid descriptors and sensory images meant to impart the experience of the main course. We’re not going to do that. We’re just going to tell you that it was real fucking good. It was so good that we’re going to go back there as often as possible and try every single vegetarian dish that pops up on their menu. We’re also going to make a point of enjoying the good sized bar and solid cocktail menu every chance we get.

While we’re at it we’ll also rejoice in the fact that the restaurant’s ambiance is either as fancy or as casual as the people in it at any given time, and fall down on our knees and praise the little baby Jesus that someone has finally realized it’s legal to keep their kitchen open past 9:30 pm. (Food Market serves dinner 7 nights a week until 1 am.)

Bottom line: The newest restaurant on the Avenue is also the best.