So, we’re not sure if we made this up, or just picked it up along the way some place, but we’re going to go ahead and take credit for it because it appears that we are actually the first to publish it on the internet, and as everyone knows the internet is like the official hall of records or something.

Today we introduce into your lexicon a brand new phrase (unless, you know, you’ve heard it before). And that phrase is:

The Baltimore Yellow n. The period of time built into traffic signals during which the lights facing both (or all) directions are red at the same time. This period, usually about two full seconds allotted for safety, occurs between one light turning from red to green and the next light turning from red to green. It is common practice in Baltimore to treat this period the same as a yellow light.

Example: ‘That cab driver was great. We got to the Ballpark right in time because he made every Baltimore Yellow.’ 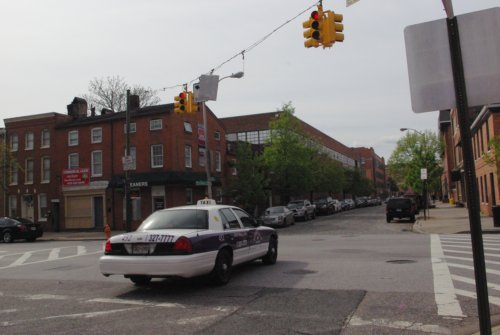 Cab drivers have perfected the art of the Baltimore Yellow.

Even if you’ve never heard this particular phrase before, it’s a pretty good bet that as a Baltimore driver you’re familiar with the phenomenon itself. Any local driver that doesn’t look both ways before stepping on the gas at a green light is almost begging for someone to come barreling into one of their doors. It’s just a habit you get into if you’re actually a good driver (and not just someone who insists for no good reason that they can drive well).

As car owner, we’ve been on both sides of the Baltimore Yellow, and now that we’re a former car owner and a full time cyclist, we’re even more painfully aware of the (ahem) unwritten rules of the road. Hell, we’ve even been pulling this move on a bicycle from time to time: looking for traffic behind and taking the lane in the intersection so as to be seen clearly by cross traffic during the Baltimore Yellow.

It’s not unsafe, per se, as long as everyone understands that this is how our streets work. Some people have been known to rant and rave and wave middle fingers and lay down on horns when they see other drivers taking advantage of the Baltimore Yellow, but whatever you think of it one thing is certain: the Baltimore Yellow is not going away any time soon, so we may as well give it a name.

(Hat tip to local blog Raising Baltimore for capturing an actual photo of a cab hitting a Baltimore Yellow.)