Among the many reasons why you gotta go see Shellac tonight is because you’ve probably never seen them before, and the smart money says you’ll probably never see them again. After all, even though they’ve been around forever, they’re not exactly banging down the door for the title of ‘hardest working band in show business.’ The bio on the Touch & Go website pretty much sums it up:

Band information:
“While there is no specific coordination between Shellac’s record releases and touring schedules, you can expect the band to tour at its usual sporadic and relaxed pace.”

Current:
“Shellac will have a new LP anytime between now and the future.” 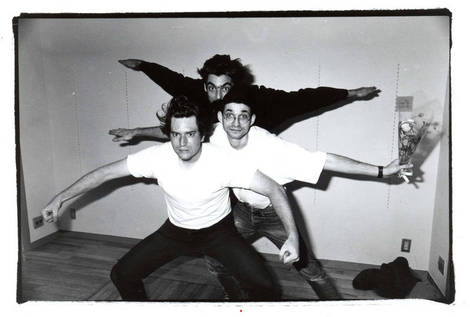 A visual approximation of the flying fuck Shellac doesn't give about you.

Now, maybe you’ve never even heard of Shellac. Don’t worry, that is a minor detail and it doesn’t matter in the least. You will still need to go see them though, whether you’ve heard of them or not. In fact, if you’re unfamiliar with the name of Shellac or its frontman Steve Albini, it’s probably because Albini doesn’t give a flying fuck whether you’ve ever heard of him or not. This is punk rock. Steve Albini doesn’t have to fucking impress you.

That said, Albini is actually pretty impressive. He first made a splash along with Naked Raygun’s Jeff Pezzati in the early 80′s when they formed Big Black, which sounded like nothing that had been heard before and like very little that’s been heard since. Although they only put out 2 records and aren’t well-remembered today, Big Black was a band’s band, and went on to be hugely influential to other bands that were hugely influential like Helmet, Clockcleaner, and Baltimore’s own Lungfish.

Although in a lot of ways Shellac is an encore, or a second act, they’ve also been fairly influential in their own right. Their musical DNA can be traced out to acts as disparate as the Dismemberment Plan, Double Dagger, and Sweep the Leg Johnny. It’s almost as if the band’s mission statement was “Hey, we’re not doing this for our fucking health… we’re doing it to show you what music can sound like if you cut the shit. Turns out that when you cut the shit, music sounds pretty good. This is another reason you need to go see Shellac tonight.

But the last and perhaps most important reason you will go see shellac tonight is because Steve Albini is a genius. Now, we don’t throw that word around lightly, and calling anyone a genius is debatable, but Albini probably is. Odds are, he’s produced your favorite record, having done recording work for acts like the Pixies, Nirvana, the Jesus Lizard, Superchunk, Helmet, PJ Harvey, Jawbreaker, Guided By Voices, Godspeed You Black Emperor, and about a thousand others. You can hear him profess musical philosophy here, here, and all over Youtube.

Even if he’s not a genius (and we don’t concede that he’s not) he sure acts like one. Which we mean to say… he’s kind of a dick. You have to be kind of a dick to name one of your bands Rapeman, call one of your records Songs About Fucking or to have a Facebook page called Steve Albini Being A Jerk. But you know what? There’s nothing wrong with that. We’re kind of a dick too, after all.

It says a lot about the state of music and especially the state of the internet that Albini is the first person we’ve ever heard say anything negative about Odd Future. Even NPR is happy to heap praise on them but you know what? Odd Future is terrible and their fans are stupid.

That’s why you’re going to come see Steve Albini and Shellac tonight. Because they’re one of the last real remaining punk bands in America. Because they’ve never been afraid to say what needs to be said and to take the path of most resistance. Because they don’t give a fuck if you come see them or not.