The makers and retailers of pocket knives would have you believe that their products can be elevated to the level of talismanic objects; heirlooms passed from generation to generation, the old romantic notion of this was Grandpappy’s GI knife and he used it to cut his way out of a POW camp in Korea and all that. That’s entirely possible with a quality knife… if you don’t lose it first. 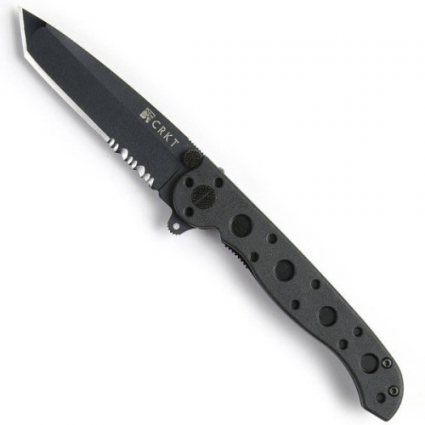 Our favorite knife to date... the CRKT Carson M16.

We lose knives all the time. As the GMP post points out, it can be tough to find the right intersection of price and quality, because you have to buy thinking you’re going to lose it sooner or later. We can hardly keep a knife longer than a pair of sunglasses, and usually end up having to buy a new one every 12-18 months. By now we’ve formed a pretty strong opinion, and knife shopping doesn’t take nearly as long as it once did.

For us, less is more. We’re not a fan of the Leatherman multitools or the top of the line Swiss Army models. That’s just too much steel. We want one blade- and we want that blade to feel large in the hand and small in the pocket, and be designed in such a way that it matches a suit as well as everyday jeans.

the first knife we really liked was ta Buck Nobleman, which served us quite well until it ended up at the bottom of the bay. It drew a lot of compliments, and our only real complaint about it was the lack of a belt clip, a feature we really like. (Tip, most belt clips are easily removable.)

We replaced that with a Gerber EVO Jr, which was a crappy piece of junk that fell apart in hand in less than a year. Last Gerber knife we’ll ever buy.

Our most recent knife, and quite possibly our next knife, was a Columbia River Tanto. We bought it for less than half of the $50 price tag on the website, and it was worth twice as much to us. It did absolutely everything asked of it, sharpened up nicely, and looked as good as it felt clipped to the pocket when not in use. In fact, throughout our travels we’ve probably met half a dozen others carrying knives from the CRKT EDC series, and every one swears it’s the best knife he’s ever owned.