No lie Baltimore, we’ve been craving a snowball lately. Like bad. Like a real one, that stains your teeth and tongue and comes in a giant styrofoam cup- none of that fake-ass Rita’s junk. We’ve yet to find one either. It’s still only May. Schools have been in and it’s just now Memorial Day weekend, so what snowball stands we have chanced to come across have been closed. After this weekend though, it’s officially snowball season. 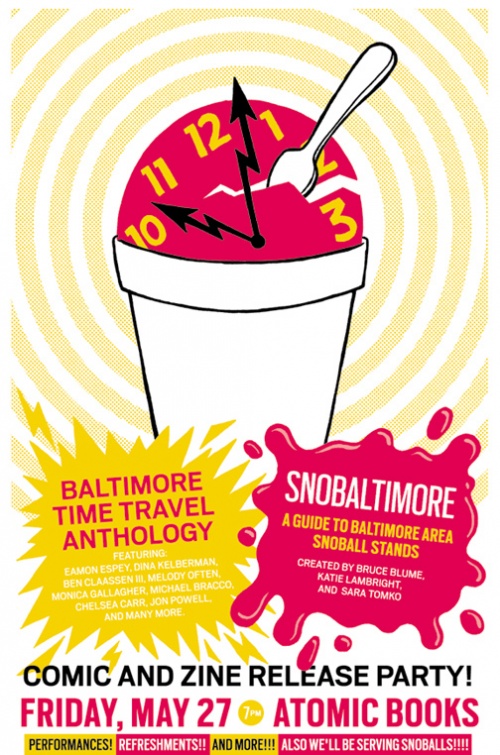 Most snowball stands have something less than what you’d call a comprehensive internet presence. Many of them are such small small businesses you won’t even find them in the yellow pages. This was the necessity that mothered the invention of the Baltimore Snoball Collective, and the publication of the first edition of their SnoBaltimore Zine, which along with the Baltimore Time Travel Anthology will be the subject of a release party at Atomic Books in Hampden tonight.

Since the Chop has already time-traveled in Hampden once this week, we’re going to focus on snowballs. More specifically, grownup snowballs. As we said recently, Tequila and Key Lime is a winning combination, but that’s just the tip of the iceberg.

We can’t have our readers just will-nilly mixing liquors and snowball flavors! That would just end in toothaches, stomachaches, and heartache for everyone involved. It’s with this sentiment in mind, and in honor of tonight’s event that we’re proud to release our Guide to Snoball Flavors and Liquor. There are thousands of workable combinations, and many of them really are very good, but if you’re new to the idea of mixing a childhood favorite with a staple of adulthood, this is a good starting point:

The Baltimore Chop Guide to Snoball Flavors and Liquor

Vodka… Anything. You can’t go wrong with vodka.

(All flavors chosen from the 2011 Southern Snow list of flavors.)