‘”But the Emperor has nothing at all on!” said a little child.’ Well, that’s not exactly true. It’s not that the Emperor of Cupertino has no clothes. It’s that he’s got just the one outfit.

We’re tempted to draw a lot of parallels between Apple, Inc. and Hans Christian Andersen’s The Emperor’s New Clothes. One powerful man’s knowledge and word is placed beyond question by the public, supposed good design is meant to make up for a complete lack of functionality, exclusivity is made a priority, people pretend to be smarter than their peers, and good money is thrown after bad on something that doesn’t work as it’s supposed to. We’re tempted to draw all those parallels, but we won’t because we know that our readers are clever enough to draw them on their own.

We’re just going to say that from a style standpoint, Steve Jobs needs some new clothes. 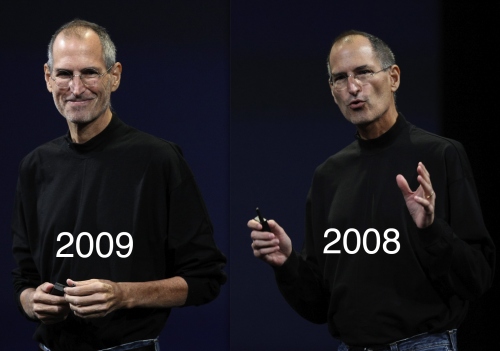 For someone who’s so often lauded for his products’ design, you would think he could realize that high design extends into the world of fashion as well. You’re supposed to be so creative? Create a damned wardrobe, why don’t you? It’s not hard at all. Any intern with an acceptance letter to business school understands that he needs to own at least two suits. Just because you’re at the top, you’re not exempt from that rule.

Steve Jobs only has one outfit. Don’t believe us? Google it.

Now, we get it. Jobs is a super rich dude and can wear whatever the hell he wants. But still, a black mock turtleneck and a pair of dad-jeans aren’t going to cut it. What? It’s comfortable? Balls. Zegna pants and cashmere sweaters are comfortable too. Why not make that your trademark? Don’t feel like shopping? Hire someone to do it for you. That’s what being rich is all about. Is there no app for that, huh?

But maybe Jobs is beyond all that. Maybe he transcends mere money. Maybe he really is the century’s most brilliant mind or a true cultural icon. Maybe he’s even an uncompromising idealist and man of the people. Whatever he may be though, he needs to start dressing better while there’s still time.

Before too long, he may be committed to a new signature look.