We’re not supposed to like golf. Historically, we’ve always thought the game was as dull as dishwater to watch and fit somewhere on the scale of elitist snobbery between polo and croquet. It was a great game for retirees, trust funders, and people in advertising sales, but not up our alley.

The first time we played we certainly felt like a fish out of water. It was a good thing we weren’t keeping score, because scorecards just don’t go that high. That course beat us up pretty good, and we were just glad that not many people were watching. And much like a middle-school bully, the game came back picking another fight sooner than later. A funny thing happened though; just like fighting a bully, we got our ass kicked, but we realized that it didn’t hurt that bad after all. We even got in a few nice shots, and it felt pretty good. We’re at the point now where we’re ready to start keeping our lunch money in our pocket when we walk to school. 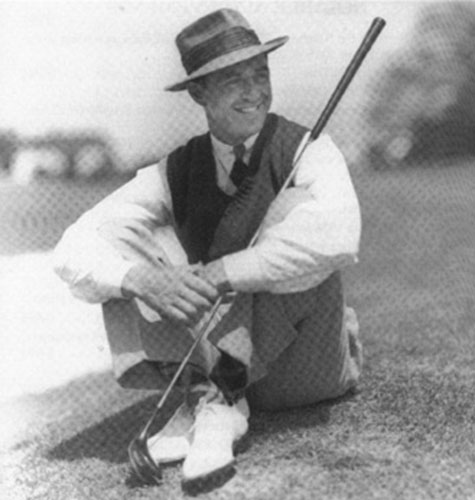 Of course, as Sam Snead illustrates, golf is also an excellent excuse to stay well-dressed.

In a lot of ways, golf is a pretty good fit for us. We’ve got plenty of leisure time to spare, on weekday mornings and whatnot, and have long been searching for some form of exercise that didn’t feel so goddamn much like working out. After all, recreation isn’t supposed to be work. We used our incredible thrifting skills to acquire a decent full set of irons, some woods that are actually made of wood, and a few other clubs to cobble together into a pretty nice bag for just under $40. With this last barrier to entry broken, we’re ready to get hacking at the driving ranges and city parks.

Now that we’re actually playing, we’re surprised to learn that the things we like about playing golf are many of the same things we like about watching baseball. We’d never realized before how much of an escape a round of golf provides. Just like entering a baseball stadium, to step onto a golf course is to enter a sharply defined environ, which is exclusive of everything outside the fence. It should matter little to the baseball fan whether he finds himself in the bleachers at Wrigley or at the Yard. We’ve always felt that once you’re inside a baseball stadium, the city outside is irrelevant. It may as well cease to exist. So it is with a golf course. We suspect it matters little whether you’re at the beaches in South Carolina or the Hills of Arizona, or even right here in Baltimore staring out at the downtown skyline. It still comes down to you and your ball and grass and trees.

Another part of that escape is the commitment of time required to play a round. We’ve always loved that baseball is the only major sport not played on a clock. It’s right and fitting that we should play our games until they’re finished, and not until some clock tells us to stop. With golf, as with a trip to the ballpark, you’ve got to block out a good chunk of time. You say “This is what I’m doing now. This and nothing else but this. Everything else will wait.” As soon as you begin, you can feel free to take off your watch. You won’t be needing it.

And a funny thing can happen when you go without your watch like that. After a while, the games blend together. Each ballgame we watch is not so much an individual game, as a part of the one big game we’ve been watching since we were a kid. We could care less how many hits Brian Roberts can rack up in nine innings; we’re watching his career. Every day at the ballpark is merely a continuation of the last. It’s impossible to make a trip to Camden Yards, or to any other ballpark for that matter, without thinking of all the other games we’ve seen, and all the people we’ve seen them with.

So it is with golf, and the idea of the ‘replay.’ The round only ends if you want it to. If you finish 18 and want to go around again, you do. All the rounds you’ve played before are carried with you, right there in your bag, and you’re never really finished unless and until you ultimately find the game so frustrating that you throw your clubs into the sea, walk off the course and take up bowling instead.