Please understand: we are very wary about endorsing hats as a point of style. Very few people can pull them off in the modern era without affectation, and where you see a fedora or trilby anywhere in the media, you can bet one of America’s biggest douchebags is under it.

However, as Hunter S. Thompson shows us here, sometimes a man in a hat is a bad mother fucker. 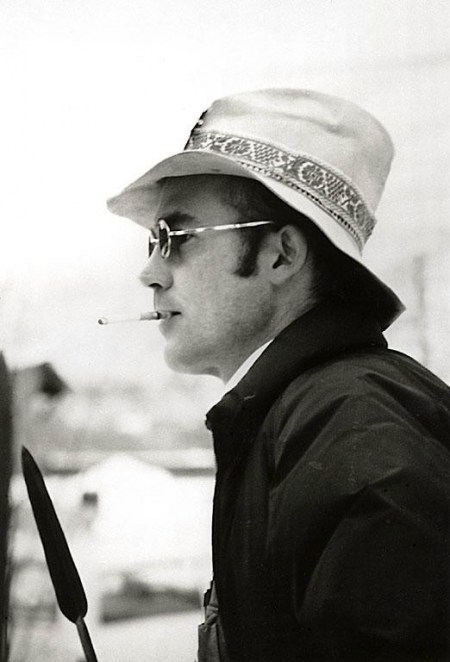 Thompson was a very bald man who spent a great amount of time chasing assholes around the desert. He knew a thing or two about keeping the sun off his head. In fact, everything Thompson wore was extremely functional; sunglasses to shade the eyes and hide bloodshots. Boots for pounding pavement or kicking the way out of a jam, lots of pockets for cigarettes and drugs and guns and whatnot… you get the idea.

So with the weather turning warm now and the sun shining longer and longer by the day, we’re in the market for a new straw hat. We’re thinking we might head down to Hippodrome Hatters and try on a homburg or a snap-brim for the Summer. This endorsement is not unconditional though. There are a few rules to keep in mind with hats to make sure they look natural and effortless, and not like this.

2. Be sure it fits the rest of your outfit. It’ll look fine worn over a linen or seersucker shirt, but downright clownish worn with jeans and tennis shoes. A summer hat should complement an already cohesive style.

3. Be over 30. Or at least damn near 30. This is just not a young man’s look. Youth has plenty of advantages, but the ability to pull off things like elbow patches, loafers, beards and hats is not one of them.

4. Stay in the sun. No man should ever be wearing a hat indoors, and likewise they’re equally out of place after the sun sets. Straw is subject to the same rules as sunglasses. Anyone wearing them inside or at night or both is a douchebag.

Perhaps no other accessory is so fraught with the possibility for disaster. Wear it wrong once, and tagged photos could be following you around the internet forever. Wear it right though, and it’ll fit so naturally it would be hard to picture you without it.