Now that the holidays have come and gone and the dead-of-winter hibernation period has fully set in, we’re beginning to make subtle preparations to go a-traveling again. One of the most important of those preparations is the acquisition of a new pair of solid-yet-comfortable everyday shoes that can withstand many hours of standing still in comfort.

We settled on these chukka boots from Johnston and Murphy, which feature a crepe rubber sole and sheepskin lining, and which were comfortable the moment we tried them on, and won’t really require any breaking in at all. 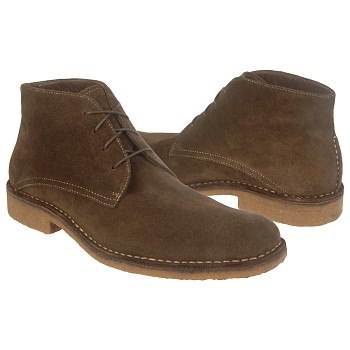 These boots were made for... standin' around.

This isn’t a post about shoes though: it’s a post about a shoe store. When we first set out to shoe shopping, we began by going into Benjamin Lovell in Harbor East, and were sorely disappointed. Their stock was so depleted, and the store featured so many empty shelves that in another neighborhood you might think it was a drug front. As the only customer in the shop we were double-teamed by the staff, who after not having our size of the one shoe we sort of liked, made a point of saying “Well, if there’s something else you need we can order it for you.” Really? No shit? There’s a new invention called the internet. We can order shoes from it without you, thanks.

Since we were downtown anyway, and already had one of those little parking meter slips for the dashboard we stopped by Famous Footwear and, well, that’s 3 minutes of our life we’ll never get back. Don’t ever go to Famous Footwear. Unless you want to buy a pair of Sketchers. Then go.

Which brings us to Dan Brothers. Over the years, we’ve been by there dozens of times, but never really been drawn in. (There’s not much in the way of window displays.) We’ve even been to their website, which is not a particularly good website, and could use a redesign.

The store itself though is outstanding. The large inventory is beautifully displayed and runs the full range from smart-casual to business to formal, even including exotic skins and boots, and a clearance section with shoes you might actually want to wear. Dan Bros is about as old-school Baltimore as you can get, and the friendly, local staff gives the place more the feel of a neighborhood barbershop than a shoe store.

In 70 years they claim to have sold shoes to everyone from William Donald Schaefer to Muhammad Ali, and we can see why. If you want to be the sort of bastard that walks in someplace, orders a good Scotch, puts your feet up on the table and hears someone ask “Whoa, where’d you get those shoes?” Then you’d do well to swing by Dan Bros. It took some self-control for us to walk out of there with only one pair, and we’re certain our first visit will be the first of many.