We would have liked to get this up before Christmas, when we were talking last week about ’tis the season for amaretto, but Christmas will sneak up on you quickly… like the Krampus. Anyway, this is the time of year when you seem to see bottles of amaretto floating around everywhere. Since taking that stuff straight is about as enjoyable as drinking maple syrup, you’ve got to know how to mix it if you don’t want that bottle to collect dust and become something of an annual holiday joke.

An obvious choice in dealing with amaretto is cranberry juice, which is very seasonal this time of year and which has the tartness to offset the overly sweet taste of amaretto. Although the folks at DiSaronno and their vaguely ethnic, very homosexual spokesman would have you think differently, cranberry alone is not a suitable mixer for amaretto. Mixing two things that are gross will never make something that is good. It’s going to take a little more mixing to come up with something drinkable. We did a little more mixing, and the result was the Père Noël cocktail. 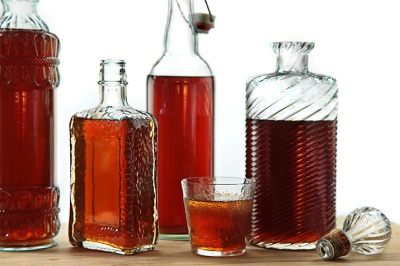 If it comes out red, it's got too much cranberry in it.

Pour ingredients in that order into a double old-fashioned or highball glass full of ice. Stir once or twice and sip.

It’s important not to use too much juice in this. It’s a cocktail and not a highball or juice mixer. When you get it right, it should taste surprisingly similar to the inside part of a chocolate-covered cherry. (Cherry cordials are one of the Chop’s favorite things about Christmas, by the way.) That said, this drink goes really, really well with dark chocolate, so if you’ve got some lying around after the holidays, mixing up one of these is a great way to complement it after dinner, or if you’re in a diet, instead of dinner.

Photo and more on amaretto at Liquor Snob.