What? You haven’t been to Mondo Baltimore at the Windup Space yet? What’s the matter? You don’t like blood and guts and dick jokes and film freaks and beer? What are you? A Communist? This is some real, genuine first amendment stuff right here, baby. It’s also free. Nothing says freedom like free.

What could be more American than Thanksgiving, the spirit of the open American road and the pastoral surroundings of a simple country turkey farm? 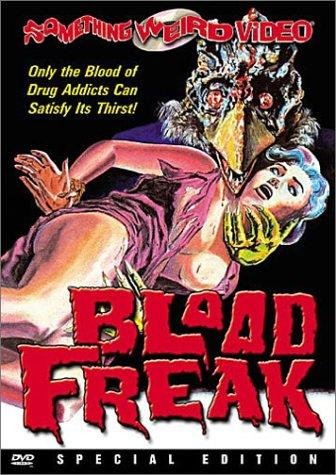 That’s the setting for tonight’s feature, Blood Freak. We’re not really sure how Blood Freak fits into the Mondo series though. So far Mondo has highlighted the weird and the bizarre, but Blood Freak seems perfectly logical and sensible to us. If you were a biker in the 70′s, wouldn’t you dig drugs and chicks? If you were a turkey farming mad scientist and some drugged up biker tried to bang your daughter, wouldn’t you turn him into a giant turkey? If you were just transformed into a turkey, you’d probably want to go on a homicidal rampage, wouldn’t you? See? It all makes perfect sense.

After all, what was the first Thanksgiving about? It was basically just the meal before the massacre.

Tonight’s feature will also be preceded by a short on Thanksgiving table manners, presented by Gutter Magazine’s resident Gore Whore, who knows way more about this sort of thing than you do, and is basically the Emily Post of Mondo manners.

Competition is still very tight in the Baltimore Sun’s Mobbies contest, and the Baltimore Chop is still looking for your votes. We put a lot of time into writing this thing every day on a crummy old computer that freezes up constantly, but you can click over there now and vote very quickly. Look for the Chop in the Personal, Music/Nightlife, and Misfits categories, and don’t forget to vote for best overall.

As an anonymous blog, we can’t exactly bug our real life friends for votes every day, so it’s up to you, the readers, to put the Chop on top.