Well Baltimore, you finally came through for us on a Sunday. The Chop was content to spend Sundays at home, waxing philosophical and drinking wine on the balcony, but yeah, we’d rather go out.

And we wouldn’t miss this one. Pedro the Lion is playing the Ottobar tonight. Okay, it’s not actually Pedro the Lion. It’s David Bazan, but it’s no great leap in logic to say that Pedro was David and vice versa. In fact, there have been few other bands in recent history who’s frontman has stood so far out front. Pedro the Lion’s sound was always so personal and intimate that it was entirely clear it was the David Bazan Show, and it wasn’t far off what you can expect tonight; downbeat rhythms and haunting melodies interwoven with iconic imagery, high-minded ideas, and crying-in-your-room-alone lyrics. 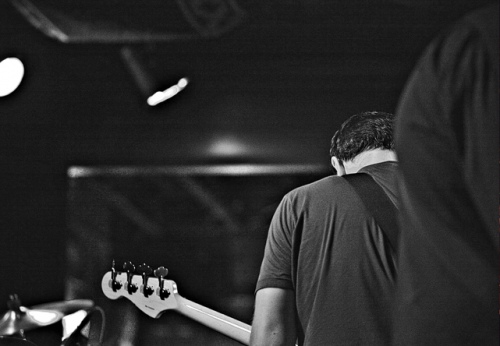 Much has been made over the last 15 years about Bazan’s religion or lack thereof, but the Chop has always considered him to be an artist first; an artist who happened to be Christian. Just as we now see him as an artist who happens to be a former Christian. Throughout it all, it’s been fascinating to watch Bazan grow both as an artist and as a man. Few performers, or even people for that matter, are willing to struggle so earnestly with their beliefs, and no matter what our own faith may be about the next world, Bazan has something terribly poignant and essential to teach us about being alive in this one.

We’re also looking forward to checking out Urbana/Champaign’s Headlights, who are touring extensively with Bazan, and whose Wildlife LP on Polyvinyl sounds like an updated and underproduced Anniversary record, and we mean that in the nicest way possible. As much as we love just about everything else Polyvinyl ever put out (Braid! Ranier Maria!), we’re sure we’ll wake up Monday morning loving headlights just as much. You should too.