Like we said… we love Remington. We love it so much, we’re heading back out there tonight to catch Baltimore’s best band Double Dagger when they appear on the latest installment of the Ed Schrader Show tonight. 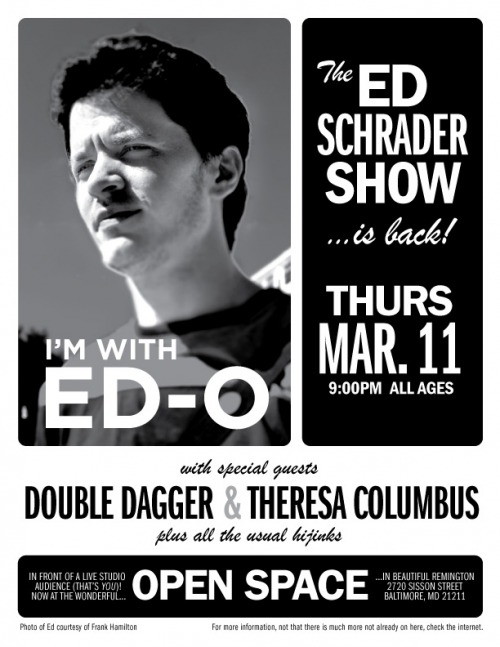 What’s the Schrader show all about? Well, if you took a sampling of the generalized content from this blog right here, The Baltimore Chop, and mixed it up with David Letterman, and made it like once or twice a year instead of daily, and let the audience drink Natty Boh’s, the result would be Ed Schrader. Past guests have included Cex, Jason Urick, CCRG’s, Food not Bombs, and Dan Deacon, among others.

The show is a Wham City production, and while we think they’re usually way too hipster for their own good (and we don’t say that kind of thing often), they’ve dreamed up a good one this time. We also haven’t yet had a chance to get to Openspace (2720 Sisson Street. The garage right behind the alligator mural.) yet, since that’s another spot that debuted shortly before we went to Europe. We’ve heard good things about both the space and the kids running it, so we’re definitely eager to see for ourselves.