We should all be lucky enough to live in Remington.

Seriously. Its a nice little spot, and the Chop came very close to moving there when we were doing our house buying. We’re right at home in the friendly confines of the Dizz, Papermoon, the Ottobar, etc.

What’s more, we remember a time when Remington was a real shithole; A bona-fide garbage dump. We’ve really enjoyed seeing the houses made over one at a time (the right way) and the slow influx of grad students and other professionals from Johns Hopkins. We’d say that Remington is no longer Hampden-south or CV-west, but is finally a viable neighborhood in its own right. Its even got its very own Blog.

But in a sense, we do all live in Remington, inasmuch as we’re all going to be negatively effected by the proposed Wal-Mart and Lowe’s development. The Mobtown Shank has already done an excellent job of pointing out the harm that big box stores would cause to North Baltimore, and you can sign a petition against the development here, but now is not the time for blogs and petitions. Now, right now, today, is the time to go out and get organized. 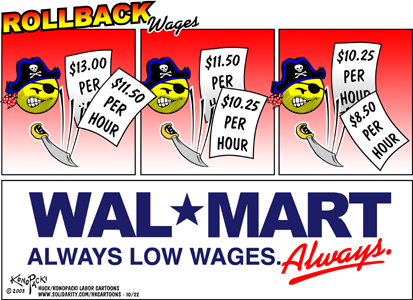 Tonight there will be a meeting of the Remington Neighborhood Association at the Good Shepherd Church (27th and Huntingdon) at 7:00 pm. You don’t need to live in Remington to show up! The meeting will focus entirely on keeping Wal-Mart off 25th street, and is the first of what should be a series of organized efforts.

And while you’re in the neighborhood, you can also stroll right over to the Ottobar after the meeting and check out Stars of Track and Field, like we’re about to do. We’re not nuts about this band, and we don’t really know anyone who is, although they’ve been successful enough recently. Ten dollars at the door on a Tuesday is a good chance to make up our mind once and for all. besides, any band who takes a Belle and Sebastian song for its name can’t be all bad.