As the end of the year approaches rapidly it’s looking increasingly like we might find ourselves home for the holidays, as it were. Inasmuch as Thanksgiving is tomorrow and it is one of the days that is a holi- we’re at least around for that, and the Holiday Season writ large begins this week. So what does one do when one is home for the Holidays? Anymore for most city residents it means either climbing into the car to drive to the suburbs or getting on a plane to go back to wherever you’re from for the actual holidays. 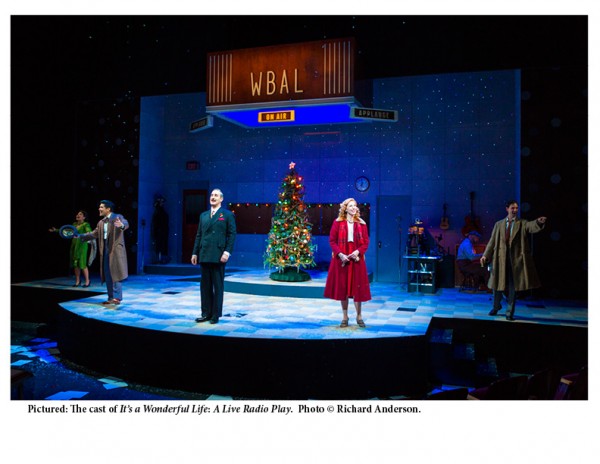 IT’S A WONDERFUL LIFE AT CENTERSTAGE. Running now through December 21, Centerstage has brought Bedford Falls to Baltimore. In this adaptation of Frank Capra’s Christmas Classic we open on the studios of WBAL radio in 1946. The ‘ON AIR’ sign flashes and the evening’s programming is a radio play of the life of George Bailey.

As is often true with radio, the audience starts out very much aware of the artifice. In this production though it’s not long before the mics melt away and we start to picture the characters fully. This is accomplished on stage by the cast of five making a subtle transition from radio voice overs to the characters themselves- although throughout each is adept at pulling double or triple duty into small roles as radio players so often do.

This skillful cast takes the best of the film and transforms it into something that, if we’re being entirely honest, is even more enjoyable than the film, which feels a bit longer every Christmas. See it yourself, and maybe slip a pair of tickets into someone’s Christmas card.

ICE SKATING One of the best dates we ever had was at an ice rink. It was with someone we loved. She looked gorgeous in a fur cap and mittens. They’d set up the rink in Fell’s Point, at the site that’s about to become Harbor Point and there was Christmas music playing with just the slightest dusting of snowflakes coming down. They sold hot chocolate that we sipped while we watched little bundled up children fall and slide across the ice during kids’ skate, and we held hands and held each other up a little during adult skate. It was an incredible evening that we wished could last forever.

One of the worst dates we’ve ever been on was at an ice rink. It was with someone with whom we’d soon break up. There were no snowflakes, just an ugly steel roof overhead. No Christmas music- only vapid top 40 hits over a static riddled PA. No adorable cherubic children, just a lot of snotty teenagers. We couldn’t wait to get the hell out of there.

That’s the difference between an outdoor rink and an indoor rink. We were totally excited to see the return of an outdoor rink to downtown, but that excitement is tempered a bit by the rink’s size and location at the soon-to-be-demolished McKeldin Fountain. Baltimore is in great need of a permanent location for a large seasonal outdoor rink. We favor Rash Field as a location. Rash is due for a renovation anyway, and there’s no reason they can’t carve out rink space which can be enjoyed by a wide cross section of city residents. Beach Volleyball has a very narrow appeal and more parking is the last thing needed on that site.

In the meantime information on this season’s rink can be found here, and we hope a critical mass of people will turn out to skate and prove the demand for better and more consistent outdoor rinks downtown.

GERMAN MARKET. Back for a second season this year is the German Christmas Village in West Shore Park at the Inner Harbor. The city bills this event as authentic and after having spent some time in Germany during the holiday season we’re glad to report that Baltimore’s version of a German holiday village is about 8/10 on the authenticity scale. Ours is a little more commercial than the ones we saw over there, but that’s not necessarily a bad thing. Everyone’s got shopping to do and doing it here followed by gingerbread and mulled wine in the beer garden is a can’t-miss holiday plan.

BAZAART. We wrote a post four years ago about how the AVAM’s Sideshow gift shop is one of the best places in the city to do your Christmas shopping, and not much has changed since then. This year the Sideshow goes it one better with their free Bazaart event this Saturday, November 29 from 10-5.

In addition to the packed-to-the gills gift shop the museum welcomes more than 50 local artists and crafters including perennial favorites like Baltimore Papercuts, Red Prairie Press and Bugs of Baltimore. While you’re there tour the whole Rouse Visionary Center for free, or make a day of it and splurge for admission to the full museum.

LAST BUT NOT LEAST. We’ve said before that memberships make great gifts. A gift membership to the BMA, the Creative Alliance, Friends of the Maryland Film Festival or any other cultural institution is a gift any Baltimorean should be proud to receive. But this year perhaps the ultimate Christmas gift is a membership to Hampden’s Charmery.

The shop announced last week that it will be offering memberships beginning in January. Members will receive two pints a month for either the first quarter or the entire year. It’s a little expensive when you do the math, even as premium ice cream goes, but it’s a solid gold guarantee that whoever you’re giving it to has never received an ice cream subscription before. What’s more, with the Charmery’s unique limited flavors it’s a guarantee that this gift is above and beyond a few pints of rum raisin.

With two pints a month, this is definitely the sort of gift that’s for-you-but-really-for-me-too and we think the potential for a latter-day Gift of the Magi scenario is high. He traded in his iPhone and bought her an ice cream membership- she quit the gym and gave up desserts to get him an Apple Watch. You’ll never believe what happened next…