Today is the final installment in our series on the signs one sees on city streets. Earlier this week we looked at the various signs found in good neighborhoods, bad neighborhoods, and marginal neighborhoods, and did a little exploration of how they contrast with each other. (Read the introduction to the series here.)

As we surveyed a large part of the city with an eye toward signs, we noticed a few interesting signs that didn’t necessarily have much to say about their location, but which were noteworthy nonetheless and we felt were worth posting. So today we present Part V: the leftover and vintage signs.

Unlike some other neighborhood watch type signs, this example is in virtually every neighborhood citywide and might even be present in the closer county suburbs. These signs have been a fixture at least since the Chop was a kid in the early 80′s and as far as we can tell they have no actual meaning whatsoever. 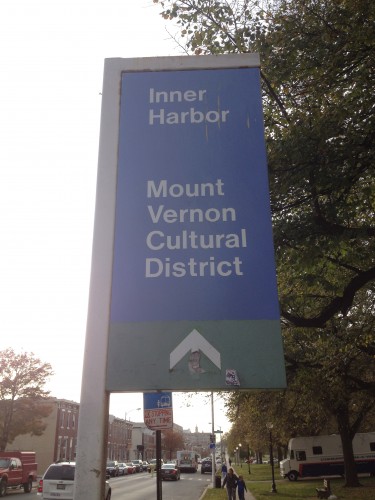 The green and blue signs that point to attractions are another sign that we can well remember seeing around when we were a kid. We believe that these date somewhere from the 1970′s and the period when the city was enthralled by Brutalism. They are starting to show their age in many places and we don’t think that the city is actively maintaining or replacing them with similar signs. Newer signs that point the way to attractions tend to look more like this.

The newer signs have retained the color scheme but look a bit more modern and are considerably smaller and thinner. Perhaps most worthy of note is that while the new sign points the way to transit, many of the older versions use the green area to indicate the proper lane to motorists.

The older version of these signs spread all over the city and highlight every attraction from Pimlico Race Track down to Fort McHenry. As a kid we always loved these signs because seeing them meant we were going deeper into the city to do something fun like go to the zoo or Memorial Stadium or the attractions at the Inner Harbor. If we ever get the disposable income together, we might decide to commission someone to paint us one of these on canvas.

Here’s another sign we can recall seeing with some regularity as a kid. Our school had a few of them hanging around but they were already more or less obsolete by the time we had even the faintest notion of what nuclear war meant. After the Berlin Wall fell in 1989 (the Chop was 9 years old then) the Cold War was really over and these signs did become historic relics.

Originally these signs indicated where the public could shelter in the event of a nuclear attack by the Soviet Union. Now they indicate that a property hasn’t changed very much in the last 40-50 years. We found this one on a large building in a very industrial section of the city. 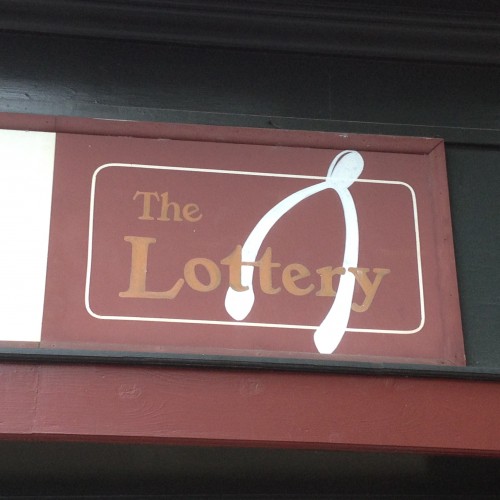 Here’s another sort of sign that indicates a neighborhood is changing by not changing at all. This one is from Ridgely’s Delight and we suspect they keep it around for old times’ sake, but there are plenty of examples of signs that say things like ‘lotto’ or ‘The Numbers Game’ or have dated Coke or Pepsi logos at the top that were once brand new and have just aged and aged and aged until they’re now vintage antiques in front of shops that are just barely hanging on. 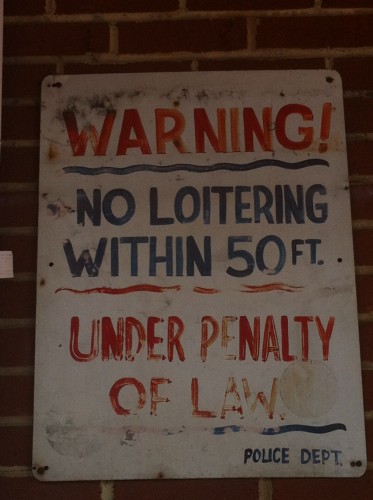 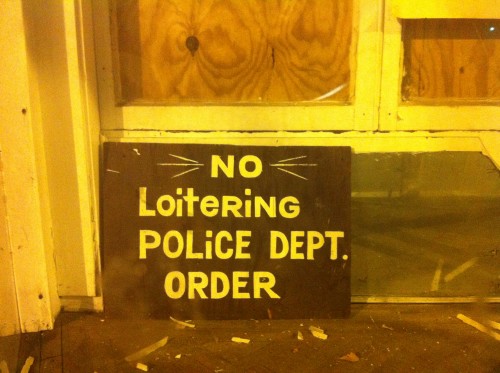 Here are a few vintage No Loitering signs. These both look to be hand-lettered. Top is from Dogwatch Tavern in Fell’s Point and the bottom is from Park Ave near Franklin Street. 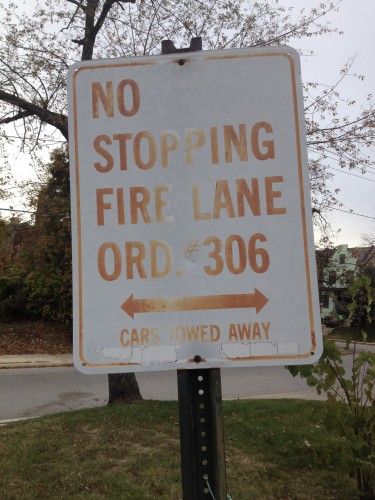 Here’s an old fashioned fire lane sign that was probably posted when the property was built and has likely just sat in the driveway ever since. Like many older signs it cites chapter and verse of the law it references, which seems kind of quaint by today’s standards. 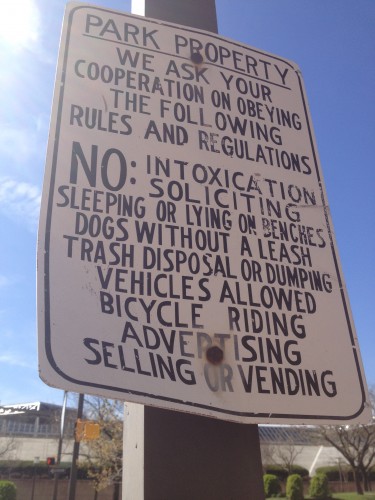 This sign hangs on Pratt Street in the plaza-sidewalk outside of the federal courthouse. It looks to predate almost everything around it; parking meters and benches and trash cans and the like. It’s an antique hanging among a city street that’s been entirely remade in the last generation. But they leave it up because all of the rules are still in force even though no one notices the sign. How do we know no one notices? Because people do all of these things every day in this park. Hell, we rode by on a bike when we snapped this photo. 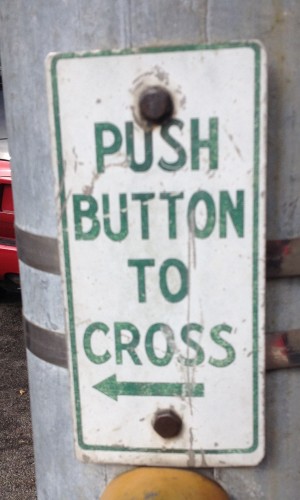 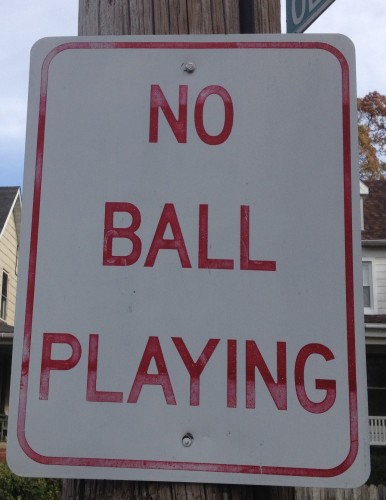 When it was installed this sign was probably a strong indicator of a healthy block with a lot of young families owning homes and kids playing outside. Since it’s on the Chop’s own block we can tell you that’s not so much the case right now. Similarly, something like handicap parking permit zones can indicate that the population of a neighborhood is aging as a whole. 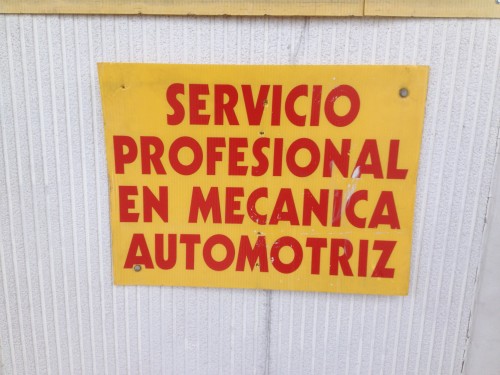 This sign in a Shell station isn’t interesting for what it says but because it’s in Spanish. It won’t tell you anything about the neighborhood you’re in unless you know much about the history of immigration and how racial succession works in urban neighborhoods. If you do it can suggest quite a lot about the surrounding area. 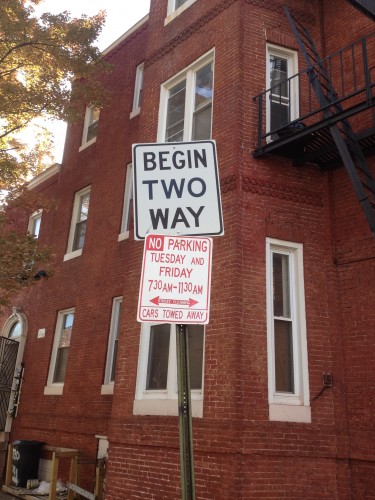 Finally we see what looks like a perfectly ordinary traffic sign from West Baltimore. Most people wouldn’t think twice about it but it struck us as being very oddly placed because this block sees very little traffic flow at all. It would seem that picking a block to split the street into one way traffic is over-engineering until one considers the exact location and historical context. Once that’s taken into account it’s pretty obvious that this is a relic of segregation, and was very likely placed to prevent black traffic from crossing into a white neighborhood. As this part of West Baltimore emptied out and turned to blight (this is very near the highway to nowhere) it was never necessary to reexamine the traffic pattern or adjust the signage, and it’s simply frozen in place.