It’s important for everyone, now and then, to introduce new shit into their lives. To keep things from getting too stale and predictable they’ve got to be changed up once in a while. The Chop is of course no exception, and as much as we often might like to pick a moment in time and say ‘life was pretty good right about then, let’s just keep things exactly like that.’ we can’t do it any more than you can drive a Delorean back to 1985. The next best thing is to go out and find some good new shit.

With that in mind here’s a little top five list of good new shit that we’ve found lately. It’s not all brand new of course, but it’s at least new to us. If it’s new to you too take a closer look. Some of this new shit might one day be an old favorite. 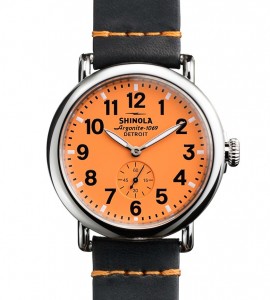 Oriole orange. Just in time for the playoffs. This and feature image: shinola website

We remember distinctly when Shinola opened up its doors three years ago in Detroit. It made one product: a watch that was too damn big for anyone not named Flavor Flav. Still, with the former head of Fossil behind the brand it had the chops and the bucks to do things right, and it’s been interesting to see how far they’ve come so quickly. Looking around their website, or any write up anywhere that mentions the brand- they lay on the whole Detroit renaissance thing pretty thick, almost to the point of being a Wizard-of-Oz-ly fairy tale.

Seeing the name and face of a specific person (most likely a person of color) who actually assembled your watch is completely unnecessary to any consumer and has a bit of a Sally Struthers sponsor an orphan feel to it in this context. We wish they’d tone that kind of thing down, in no small part because it’s so ridiculous. A factory live-cam broadcasting over the Web? Come onnnnnn…. Once you get past all that though, the products stand up on their own and come in at prices that are pretty fair for high quality goods (except those bikes which are pretty effing pricey).

We’re talking especially about the scaled down 41mm version of Shinola’s signature watch, the Runwell. Now available in a range of attractive color combos and on various straps and bracelets, a Runwell 41 is an outstanding choice for style conscious men who want something nicer than a $40 Timex but can’t lay out $1500 or more for a ‘nice’ watch. When were looking around for a watch earlier this week we ultimately settled on something else, but we’ve got to tip our cap to Shinola. After trying one on the Runwell looked damn good on the wrist.

When he’s on a ship with lousy food for several months, a man gets to spending copious amounts of time fantasizing about all the food he’s going to eat when he gets home. This recipe we found on the Garden and Gun site was one of those fantasies that kept coming back to us time and again.

It had been a long time since we’d had pimiento cheese and we don’t recall being madly in love with it the last time we did. But it never occurred to us to make it from scratch. Pimiento cheese is a Southern staple that much like some of our own local gastronomical traditions (like scrapple or sauerkraut at Thanksgiving) defies all logic and sounds kind of gross but is actually very delicious.

After making this recipe at home we’re pleased to report that A: it is creamy and smooth and looks nothing like the picture if you let the cheese warm up and then grate it yourself and B: it matches perfectly with three things that are plentiful this time of year; namely Farmers’ Market veggies, hot weather and cold beer. We’re hooked.

Did you ever listen to that band My Morning Jacket? Did you ever notice that no matter how badly you want to like them you have to admit that they’re painfully slow and kind of boring? Well Great Lake Swimmers is the band we always wished MMJ actually was. We’d just never heard them before now.

That’s not to say that they’re new. They’ve been around more than ten years and have five full lengths available, but seem to be significantly less popular than similar acts like Iron and Wine or Bon Iver. Which is a shame because for our money they blow those bands out of the water. A quick look at their website reveals the probable cause of this discrepancy in popularity- these guys are Canadians, and it doesn’t look like they come south of the border very often.

Have a listen to their track Your Rocky Spine on YouTube and see if the good old US of A isn’t missing the boat on this one. 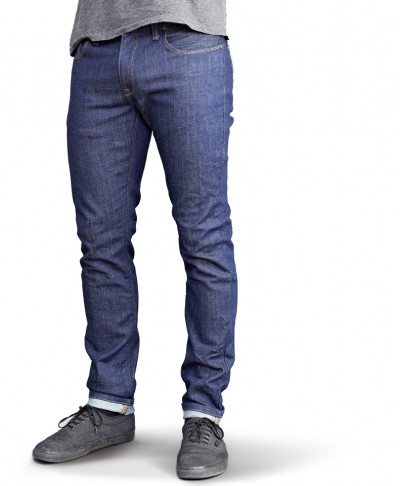 The Warby Parker of Jeans

By now Warby Parker is pretty universally accepted as one of the Web’s great e-commerce success stories of all time. They were one of the first companies that brought a boutique level of quality, service, and style to the Internet and they’re still among the brands doing it best.

The founder of the new (Yes, actually new) retailer Mott & Bow is a younger man and a quick study and just happened to be born into a family that owns a denim factory. Draw up some sharp modern styles, offer customization options, make the online shopping process as smooth as selvage with free at-home try on and come in just under a hundred bucks and you’ve got an almost foolproof recipe for success.

2014 May well be remembered as the year Baltimore went Barbecue crazy. Barbecue joints have been opening up left and right from Canton to Hampden and beyond. Just yesterday Boog Powell released a book on Barbecue, and the cover of Baltimore Magazine is asking readers from news stands if we’re a ‘legit barbecue town.’

Jumping right on top of the BBQ bandwagon is PA’s Yuengling, which just released its own line of sauces based on three of its beer varieties. Traditional, hickory smoked and honey BBQ are now available in grocery stores locally, along with a range of wing sauces with 3 levels of heat. Tasty on tofu for a vegetarian such as the Chop.