It’s Spring time for real now. Our long regional nightmare of Winter is over and the days are longer and the weather is nicer. For many people that means dusting off ye olde velocipede and getting back out on the streets, or at least riding more miles. And it’s in that spirit that we wanted to share three things that we noticed today.

The first is the picture above. It goes to show that when you are taking you bike out for more mileage in warm weather, it pays to check it over thoroughly and do bike maintenance 101. Don’t be like the Chop and depend on these thoroughly spent and useless brake pads to stop you when you’re riding between an 18 wheeler and an idiot kid from the suburbs. $15 Worth of replacement parts can save your ass in traffic.

The second item we want to share is the picture below: 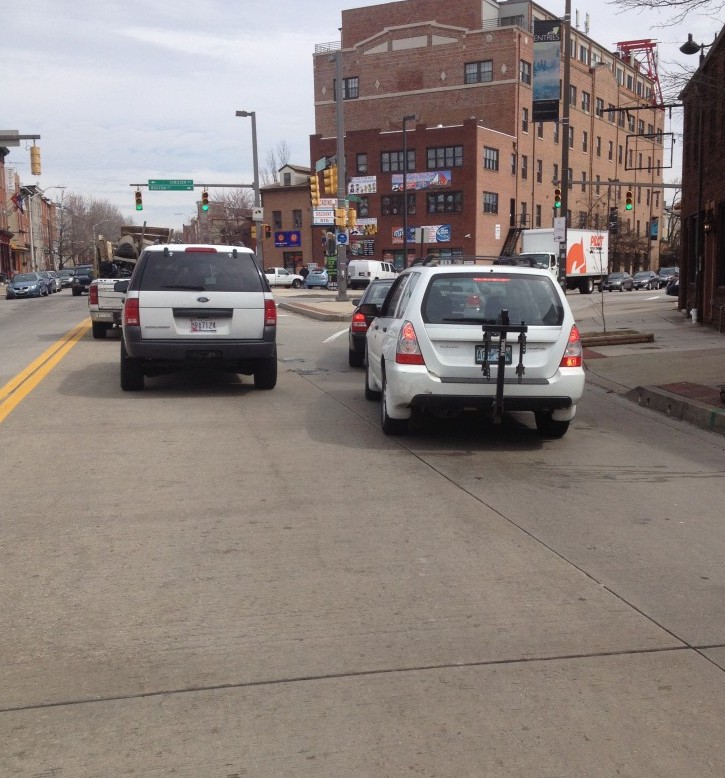 This is Fleet Street where it meets Boston Street, and when you’re riding east through this intersection you’ll find yourself in one of the city’s most dangerous traffic situations. About half of the motorists coming east on Fleet want to turn right onto Boston, and the road widens suddenly to a gentle sweep that allows them to do so without slowing down at all. The right turn has its own traffic signal and stop line as seen in the photo, so cars are still coming at a high speed even when they can plainly see a red light from half a block away. Some cars actually speed up in anticipation of reaching the relatively wider confines of Boston Street.

Anyone bicycling to the right of traffic on Fleet is in great danger of being cut off when going straight through the intersection. At worst you may be cut off and have another car attempting to turn right behind you. We come this way often and it’s happened enough times to force us to occupy the whole lane at least half a block before the intersection. We would urge anyone else passing this way to do the same for their own safety. Something really ought to be done here.

Finally, we saw this informal bike race posted on Reddit the other day. It started at 5:00 pm Saturday in Druid Hill Park and was not meant to take longer than 3 hours. Looks pretty cool. Wish we could have made it. Maybe next time?