Now that Fall has arrived and it’s cold enough the whole day through to be wearing layers you should already have gone through your closet and given your blazers and sport coats a once-over for the season, checking to see which ones may need an alteration or a pressing to prepare them for daily wear. After all, there are plenty of good reasons to don a jacket this season. The only question is what kind?

To be sure, not all jackets are created equal. Just as you wouldn’t wear the same pair of jeans for yardwork as you would to a party, the jacket you’re wearing to work meetings probably isn’t the one you’d want for a first date. As much (or more) than anything else your choice of jacket says something about you. What’s it say? read on… 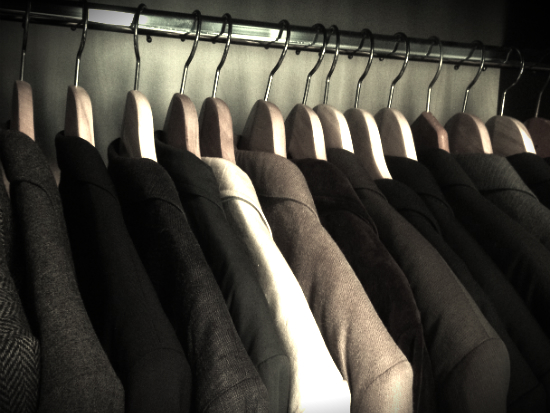 Blue wool blazer, metallic buttons: says “I have a go-to blazer, and this is it.” That’s not a bad thing, but the old blue blazer with its prep school-yacht club overtones is so conservative and traditional that no matter how you dress it down or what you add to it it’s not going to stand out. It’s the Levi’s 501 of jackets.

Any jacket with 3 buttons: says “This jacket is part of a suit, but I’m not wearing it that way.” This is usually a fashion faux pas. It is possible to get away with wearing a suit jacket without the corresponding pants, but generally speaking the only way to get away with this is with the plainest of plain suits- two button solid color wool. A jacket that has 3 buttons or pinstripes or some other dead giveaway that it’s got matching pants is very hard to pull off and is to be avoided no matter how many ’6 Ways to Wear a Suit’ articles you may have read in men’s magazines.

Corduroy, thin wale: says “I’m going to steal your girlfriend and take her apple picking and get her drunk on hot apple cider.” Thin corduroy with slim lines and a modern cut like this one from J Crew is money. No two ways about it. If you pick up a jacket like this you can wear it many different ways and look great every day in Fall. But you’ve got to spend the $200. There’s no fake it till you make it with this one.

Corduroy, wide wale: says “I’m trying to fake it till I make it.” Lots of guys, particularly those in their 20′s think that vintage corduroy jackets, especially those with elbow patches allow them to pull off that bohemian quasi-intellectual look. You know, chai lattes and volumes of Rilke and early Wes Anderson and all that. Virtually nobody nails this look so it’s better to just give up on it.

Anything double-breasted: says “I’m a grown-ass man and this jacket will definitely still be in my closet when I die.” A double breasted suit is a bold move nowadays and it could be argued that a double breasted jacket not worn as part of a suit can be even bolder. This is not a look you can pull off without having a distinct and well established personal style, but if you happen to be a guy well past 30 who looks like Jason Urick you can likely accomplish wearing a double breasted jacket to great effect.

Plaid tweed blazer (new): says “I know more about style than you, and I have more fucking money than you.” If you’re buying jackets like this one you basically belong in a Bret Easton Ellis novel. Either that or you belong with 1000 other tweed-wearing pussies riding your vintage bicycle over the Brooklyn Bridge for tea and crumpets.

Plaid tweed blazer (used): can say only one of two things about you. One is “I got incredibly lucky at a thrift store once.” The other, much more likely is “I am very, very bad at thrifting and don’t know much about vintage clothing.”

Unstructured chino sport coat: says “I take casual wear pretty seriously and own different jackets for different occasions.” Good modern casual jackets are another thing it’s tough to fake. The days of the $40 Old Navy jacket are gone. Something this casual can be tough to invest in, as it’s only appropriate for certain situations. If you’ve got one that works for you though you’re probably not just the best looking guy in the room, you”re also the most comfortable.

Herringbone and houndstooth tweed: says “I’m a little rugged, but mostly refined.” Classic patterns are classic in part because they’re versatile. Choose a jacket in one of these styles with a tight pattern as seen here and here. It’ll look just as good outdoors with jeans and boots as it does indoors with charcoal slacks and oxfords.