Baltimore is a pretty tough town. From the hills of Upper Park Heights all the way down to the wharves at Fairfield we’ve got dirt under our collective fingernails and grit beneath our boots. This is the kind of city where it can be hard to find a friend.

It was not only easy- it was free and easy. After scoring a promo code at Lyft’s launch party we took our first ride for free and now you can too. New users can enter the promo code BLTCHOP into their app between now and the New Year for a free $20 ride credit, which is enough to get you just about anywhere in town.

It’s been more than two years now since we decided to get rid of the Chopmobile and live car-free. We know better than anyone what the options are for getting around the city, and the disadvantages particular to each mode of transit. Take it from the Chop, Lyft’s got them all beat.

There’s no guesswork involved in riding with Lyft. Downloading and using the app is remarkably simple, and once you’ve signed in with Facebook and put one (or more) card numbers on file you can see exactly who’s coming to pick you up and what kind of car to look out for. But rather than standing around in the rain waiting and hoping you can stay warm inside and actually watch on your phone as your Lyft approaches your location on the map. It’s strangely addictive and exciting to watch the car get closer and closer and then look up from your phone to see a fuzzy pink mustache waiting for you.

But the real fun doesn’t begin until you’re in the passenger seat. That’s where you sit on a Lyft ride, in the front. Lyft is the first mode of travel we’ve taken where we actually did feel like a passenger on a trip and not human cargo to be delivered to a destination. Simple little things like being able to charge your phone en route or have a cup holder handy for your coffee make a world of difference. 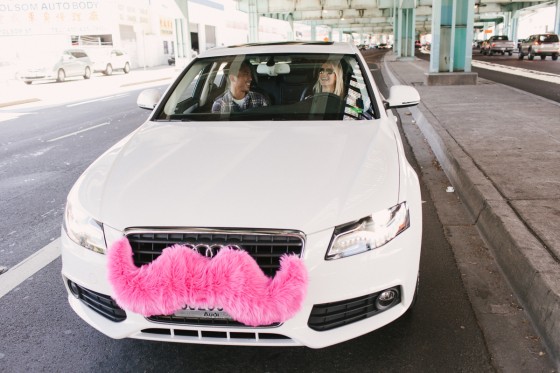 Here’s the thing about Charm City’s Lyft drivers- they aren’t ‘drivers,’ per se. They’re folks who drive. It doesn’t take more than a few city blocks’ worth of conversation to learn that the person in the seat next to you isn’t slumped over a steering wheel all day and night chasing fares. They’re teachers and grad students and artists and a dozen other things. In fact it seems to us the only trait they all have in common besides a propensity for pink ‘staches is that they’re all very friendly and extroverted.

And this being Smalltimore, a little more conversation is likely to reveal that you and your driver have at least one friend in common. After all, mutual friends and social networks don’t just exist on Facebook. Lyft is available from early morning until after midnight, and their Baltimore coverage area is almost as extensive as the city’s borders. With Hot Zones in Federal Hill, Fell’s Point and Charles Village it wouldn’t surprise us at all to bump into someone who’s given us a Lyft shopping at Eddie’s or watching the Ravens on Cross Street.

But maybe you need a Lyft to watch the Ravens? After all, those M&T parking lots aren’t cheap and once you’ve got your car in a prime Fell’s Point parking spot you’re loathe to move it ever again.

Don’t worry- The Chop’s got you covered. As we mentioned above just enter promo code BLTCHOP into your Lyft app and get ready for Lyftoff. It’s the perfect chance to make a new friend with a car, whenever you need one.

Lyft is available for iOS and Android devices. More info and FAQ’s is available on their website. We’d like to thank Lyft for sponsoring today’s post.