So this is the post where we sort through the Baltimore Beer Week events and pick out our favorite ones day by day. And we’ll get to that in a moment.

But first we want to stray off on a wee little tangent about beer, and specifically the local beer scene here in Baltimore. And our tangent is this: The tab is too damn high! We noticed this over the Summer when we sat down at a Mount Vernon bar and were charged exactly $7.09 for a Dogfish Head 60 minute IPA on draft. This was not a particularly fancy bar, and in 2013 Dogfish 60 isn’t a particularly fancy beer, so tipping a buck and bringing the total for one beer to over $8 was both surprising and upsetting.

But perhaps it shouldn’t be so surprising. We’ve been paying attention a little more closely since then and it’s been getting harder and harder to find any decent selections under $6.00, with $6.50 beers becoming more and more common in bars and taverns of all descriptions. Most bars still feature Boh or Yuengling or some other low-cost, low-quality option, but the prices are coming up on those too, and it’s not unusual to see $3.50 Boh cans now, which would have been unthinkable even a couple of years ago. 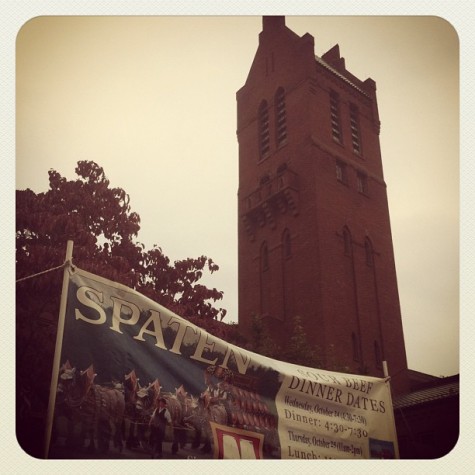 The Zion Church is a must-do for Beer Week.

Likewise Happy Hour seems to be going to the dogs. Just a few years ago it was possible to make a little mental list of who had the good happy hour on a particular day of the week. Especially Sunday-Wednesday there were particularly good deals to be found and a number of late-night happy hours that started at 10 or later. Nowadays “$1 off select drafts 4-7pm” is pretty standard, and when your drafts run $6 to start with that’s not such a great deal.

And just picking up a 6 pack and drinking at home isn’t as attractive an option as it once was. It used to be a decent six pack was about $5.50 and some really good stuff from a craft brewer was around $7.50-$8.00. Now it’s $8 for Sam Adams or Sierra Nevada and anything a step above that is over the $10 mark.

The Chop is not an economist, but it would seem to us that with more brewers and more beers hitting shelves both locally and nationally prices should be pushed downward, not up. And this price rise is not just simple inflation, as wages over the last ten years even with cost-of-living adjustments have remained flat or even slipped.

So below is our list of picks for the next 10 days. We’ve picked these events with economy and thrift in mind, and they represent the best values throughout the week. You won’t find any $60 beer-pairing dinners here- just the best specials and happy hours the week has to offer. Enjoy them, and keep an eye on your tabs. 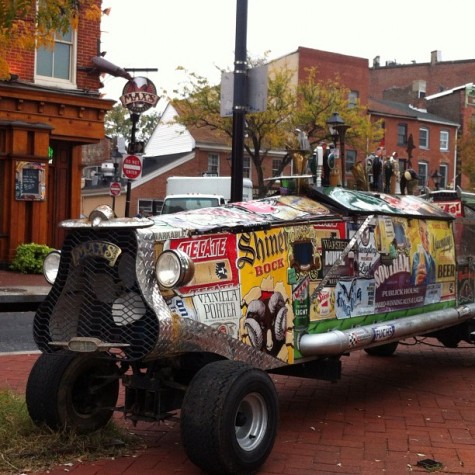 Chilibrew Chilibrew is a great event all around. $20-$25 Lets you sample and judge homemade chili of both the meat and veggie varieties as well as a pint glass to sample all the homebrew you wish. And it’s all for charity, supporting great organizations like Bikemore. (2640 Saint Paul St, 7-10pm.)

$3 Heavy Seas drafts Now this is the kind of happy hour we can get behind. Alexander’s in Fell’s Point is offering $3 Heavy Seas drafts all day, along with a free pint glass while they last. Now that’s a good excuse to eat tater tots for dinner. (710 S. Broadway, open-close)

Kick Our Kegs As far as bang for your buck it doesn’t get much better than today’s special at Mahaffey’s in Canton. They want to kick their kegs so they’re offering 3 beers for $5, and if you kick a keg on your order you get a raffle ticket, with the raffle held at 11pm. (2706 Dillon St, Noon-11pm)

Das Best Oktoberfest $35 is a little steep but that’s offset by the fact that Oktoberfest is at M&T Bank Stadium so you don’t have to schlep it out to the fairgrounds this year. (2-6pm)

Baltimore Abides Stoneleigh Lanes is sponsoring a Lebowski-themed event. $20 Gets you unlimited duckpin bowling and they show The Big Lebowski, etc. Stoneleigh is usually a BYOB venue so hopefully they don’t gouge for beer. (6703 York Rd, 9pm-1am)

Double Digit Beer Night Mahaffey’s wins the day again as they showcase beers that are 10% ABV or above. If you like high alcohol beers, this is a can’t miss. (2706 Dillon St, 6pm-close)

Mark Supik & Co. Open House We put this up as a pick for last year and we overslept or something. We were kind of bummed to miss it. This year we’ll be sure to get down there and see how tap handles are made and taste a little homebrew into the bargain. And it’s free. (1 N. Haven St, 12-4 pm)

Football. The Ravens play the Steelers this Sunday and since the game is at 4:30 you don’t have to feel too badly about drinking throughout the entire game. Every bar in Maryland will be a sports bar Sunday afternoon, so pick one and go there.

Seafood & Saison Have you been to Of Love and Regret lately? Like since the time just after they opened? Well we have and take it from us it is probably the nicest bar in Baltimore, bar none. It’s the kind of place that elevates its customers’ tastes and knowledge simply by inviting them inside. It’s not often you get a chance to drink $5 beers at OLAR, so we say get em while the getting is good. $5 seafood apps are also on offer. (1028 S. Conkling St, 4pm-10pm)

$3 Draft Spectacular Little Havana is offering $3 pints and half price sandwiches. Pretty soon it’s going to be too cold to hang out on their patio so you might want to get it in now. (1325 key Hwy, 5-10pm)

$3 Craft Beer Special We’re not sure if Abita actually qualifies as ‘craft’ but it’s still not bad and Alexander’s is offering them for $3 and keep the glass. (710 S. Broadway, open-close)

An Evening of Cartoons & Beer KAL comes to Atomic Books to talk about his new book Daggers Drawn and his long career inking political cartoons for the Sun. Raven beers flowing in the Eightbar. (3620 Falls Rd, 7-9pm)

2 For 1 Night Buy one get one on everything behind the bar except mugs at the following Greene Turtle Locations: White Marsh, Hanover, Columbia and McHenry Row. See you at the Turtle! (9pm-close)

Sliders & Ciders This blog has taken a pro-cider stance in the past so we’re firmly in favor of this event at The Point in Fell’s. $3 Angry Orchard pints and 6 slider specials. If you’re going to drink beer for 10 days straight it won’t hurt to take a cider break, you know? (1738 Thames St, 5pm-close)

Homebrew Extravaganza Homebrew is accounting for a large share of events this year, and at this one at Little Havana $10 gets you a tasting glass and free rein (although it does not use the phrase ‘all you can drink’ or similar so we’ll see). The $10 goes to BARCS so you’re drinking for charity. (1325 Key Hwy, 6-9pm)

Zion Lutheran’s Sauerbraten Dinner As old school as it gets. If you’ve never hoisted a pint in the Aldersaal at Zion put it on your Baltimore bucket list right now. (400 E Lexington St, 4:30-9pm)

Zion Lutheran’s Sauerbraten Dinner If you missed it yesterday do it today. Also: You can go just for the beer. You don’t have to eat sour beef. (400 E Lexington St, 4:30-9pm)

$3 Craft Beer Special Another day, another $3 event at Alexander’s. This time it’s Breckenridge Agave Wheat, Vanilla Porter, Lucky U IPA and Avalanche Amber or Autumn Ale. Where else are you going to get a decent all night drink special on a Friday? (710 S. Broadway, open-close)

Red Cross Event at Peabody Heights Brewery It’s not clear whether the $20 general admission includes beer, or how much of it. Could be a great deal, or not. We checked the Red Cross site and called the brewery but weren’t able to get an answer. (401 E. 30th St, noon-5pm)

Not much today that caught our interest. Maybe a good opportunity to dry out a little, huh?