About a year and a half ago we had the bright idea of doing a post about the Apex Theater. At the time, just about the only relevant Google result for the Apex was that City Paper feature from 2010. And that was more about the people who operate the theater and the financial difficulties of day to day operations.

Our angle was going to be a bit different: something more along the lines of what it was actually like to visit as a patron. It’s the sort of place that everyone has driven by 1000 times, but for the most part no one has ever been inside. The Chop has lived here our whole lifetime, and hey, we like smut as much as the next perv, but we had never even come close to being inside. And we’d always been curious about it. After all, we grew up just two or three blocks from another porn theater back when the city had more than just one or two, and so wondering about what’s inside the walls goes back as far as sneaking our first peek at a copy of Playboy back in the 80′s. 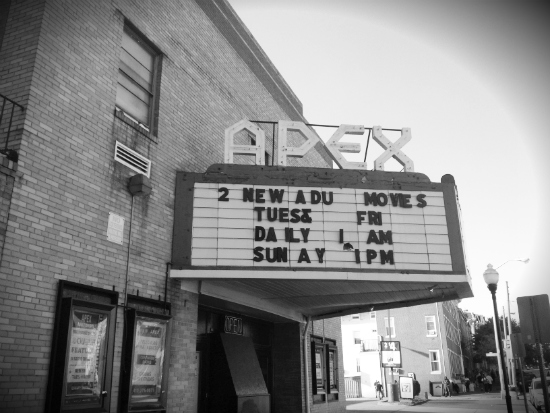 So we had the idea to make a blog post about what it’s like to walk in and pay $10 and see the inside. It was going to be complete with detailed descriptions of the building itself and the cinema on the screen, the particular types of people to be found inside, some blurry NSFW iPhone pics, maybe. It would have drawn a lot of traffic because people love to gawk at stuff like that.

And the reason we had that idea was because we knew, even years ago, that the Apex was going to close. Hell, it didn’t take a genius to figure that its days were numbered, and that once it was gone it was gone. The last of its kind. 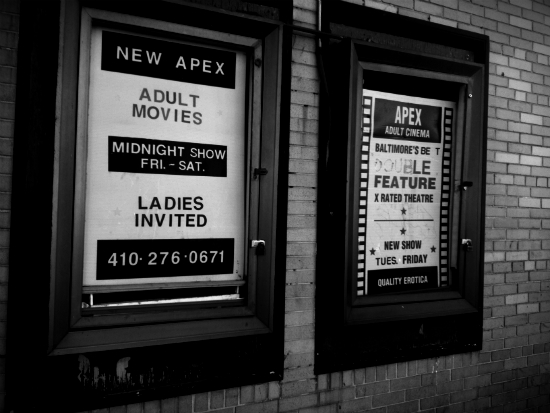 Believe it or not, we finally did get around to making a trip to the Apex about 2 months ago on a random night when we happened to be around Fell’s Point and have some time to kill. So we walked up there and what did we find? The place was closed that night for some unknown reason. The management was just taking a day off or something.

So it was a sad day when the Sun reported last week that the building would be auctioned off today. Even as the Senator rises from the ashes, the city loses another theater and with it a genuine link to the past and how things used to be. To be honest, we thought that the closure would be even more swift and final than it has been. According to that Sun article the theater’s operators are on a month to month lease, so in theory it could remain open until the end of the month or even beyond. 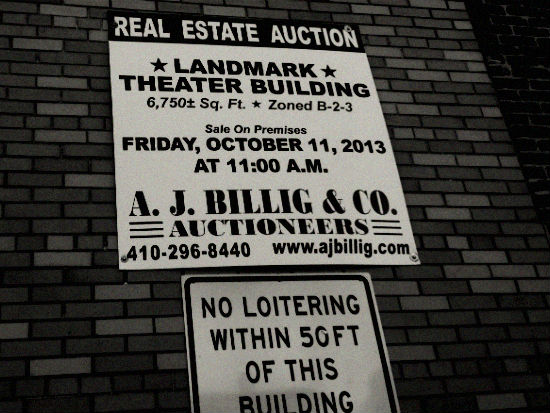 But for us that ship has sailed. This is the only post we’ll write about the Apex, and when the doors do close they’ll close without us knowing firsthand what’s behind them. Perhaps we should double down on our resolution to see more of The Places We’ve Never Been.