The coming on of Fall and the (finally!) broken heat means more than just stocking up the fridge with pumpkin ales. Around the Chophouse it means switching it up in the liquor cabinet as well. Gone are the need for light, crisp club soda mixers. This time of year we’re ready for something a bit more substantial.

So today we look not to the bar but to the coffee pot. A drip coffee maker is an often under-utilized tool in the home bartender’s toolkit. You can do things with it that most bars can’t, and the ones that can would charge you an arm and a leg for. Using real, well-roasted coffee is also a step up in quality from any of the 14 or so flavors of Kahlua available on the liquor store shelf this time of year. 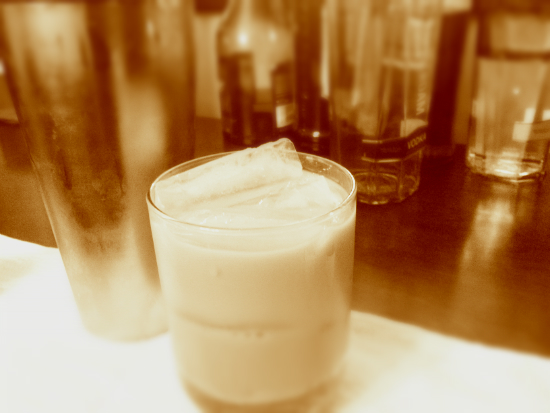 We’ve been messing around with our coffee pot, and we’ve decided to call what we’ve come up with the Brickbat. It’s a fitting name because this drink is bold and a little bitter and if you drink a few of them it’s not entirely unlike getting caught behind the ear with a piece of masonry. But if we’re being honest we decided to arbitrarily name it after the Billy Bragg song of the same name from 1996′s William Bloke. You can listen to the song here.

Shake well and strain over ice.

Yeah we don’t like flavored vodka as a concept either but vanilla vodka is useful sometimes. If you want to try and make vanilla syrup at home that’s on you but we like to keep things simple and keep the ingredients list as small as possible so there you have it.

Also the vanilla vodka provides all the drink’s sweetness because we didn’t use any sugar. If you’re using sugar mix it in while your coffee’s hot. Make it about as sweet as you’d make your morning coffee.

Luxardo is pretty simple stuff but it’s like $30 a bottle with no smaller size available. So good luck with that. You can’t substitute anything else because even though Luxardo is made of cherries it’s not cherry flavored, per se. So don’t go and get something cheap and candy flavored because it won’t work.