If you’ve paid any kind of attention at all to cycling in Baltimore recently, you know that the monthly Baltimore Bike Party has been enjoying exponential growth in recent months. The event has grown so large that last month the start location was moved over a few blocks to Pearlstone Park, also known as ‘That hill where bands play at Artscape.’ Tonight’s ride will start there as well and kicks off around 7:30.

If you’re saying to yourself ‘Hey, waitaminute! It’s not the last Friday of the month! What gives?’ The answer is that this month’s bike party was moved up a week so as not to coincide with the Baltimore Grand Prix. We’re really hoping that the city takes a good long look at the juxtaposition of these two events and sees how few resources it takes to build a grassroots volunteer movement that brings together thousands of people and how much has been wasted on the embarrassing clusterfuck that is the BGP. 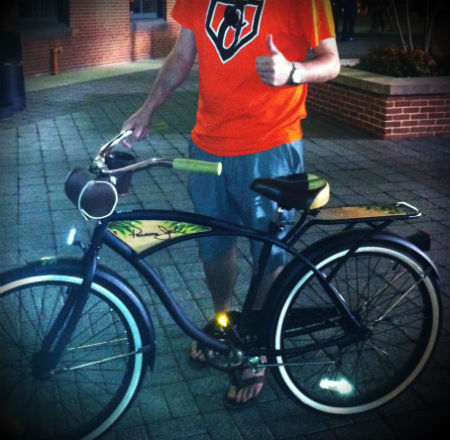 This dude is ready for a beach party bike party.

And when we say thousands of people we mean that literally. We attended last month’s Bike Party and while we didn’t hear an ‘official’ count our estimate was right around 2000 people. Those kind of numbers can’t be ignored, and last month’s ride included a (mercifully) shortened route and pretty heavy police presence.

While we recognize this is necessary, we’ve still got mixed feelings about it. It’s nice to have cops on hand to temper things like the professional bicycle thieves who are now drawn to the afterparty (Lock your bike well.) But at the same time police were not afraid to issue citations to bike partiers for open containers, which is an especially dick move since last month’s afterparty did not feature a beer vendor.

Tonight’s ride (also shorter at about 7-8 miles) ends at West Shore Park, also known as the Inner Harbor, next to the Light Street pavilion where the visitors’ center is. Food and beer will be provided by the food trucks of the Gathering, and the theme for August is ‘beach party.’ Check the Bike Party Website for more information.