The Chop’s been drinking a lot more ballpark beer than ever this season. Partially this is because we haven’t had the patience to fool around with a hip flask this Summer. Partially it’s because we’ve been treating friends to tickets and letting them buy a beer in return. But mostly it’s because this season we’re fully reconciled to buying $10 beers and not feeling entirely like we’re getting hosed.

Of course, there’s no accounting for taste. If you’re going to do laps around the concourses seeking out your favorite craft beer stand or insist it ‘jest ain’t a Bawlmer Summer widdout a Boh Hon!’ well then you’re going to pay too much for beer. But once you realize that Delaware North, who runs the food and beer concession at Oriole Park offers big cans, and those big cans are 24 ounces and cost $10, you realize you’re essentially buying two $5 beers stacked on top of one another. 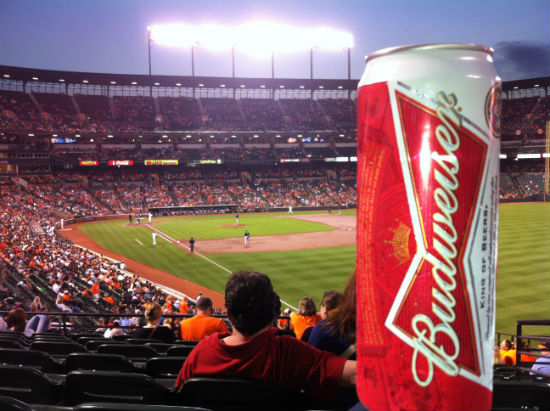 If we had our baseball druthers we’d prefer $5 12 oz. beers, and we’d prefer those beers be flying Dog Atlantic Lager. But we’ll take what we can get and this season we’ve been drinking a lot of Budweiser cans at Camden Yards. And we’ve noticed something: all the vendors there refer to them as Bud Heavy.

Which would seem to make sense, since a 24 oz can is in fact kind of heavy. But that’s not why. The Oriole vendors call Budweiser Bud Heavy simply to distinguish it from Bud Light.

We’d never heard the term before this year, but in 2013 we’ve heard it on both main concourses and Eutaw Street at just about every game we’ve attended, so it’s pretty safe to say it’s in wide use among vendors (and, one would imagine, Bud drinkers) all over the park. A quick Google search reveals that ‘Bud Heavy’ is listed in Urban Dictionary which attributes the phrase to the Midwest. Some other results suggest that it’s not so much regional, but is most commonly used in places that deal in a huge volume of Bud and Bud Light; stadiums and frat houses and sports bars and such. Relevant results run out pretty quickly though.

For our part we like the phrase, and wouldn’t mind seeing it stick around Birdland permanently. When we head down to tonight’s game against the Rays we’re gonna have a Bud Heavy or two until it’s time for a few post-game beers.