Yes. Yes you should. Here’s why.

First of all, The Russian Vodka Boycott has nothing to do with the Olympics. Unfortunately we live in an age of very lazy journalism where no hack of a cable news reporter can resist conflating two separate stories because they happen to be tangentially related. World class athletes, whether they’re gay or straight, American, Russian or whatever, are representative of strength, determination, discipline, courage, etc etc. They make good sexy copy. The lives of ordinary gay Russians and allies are not quite as exciting… but they’re the ones now under threat and they’re the ones about whom this boycott seeks to raise awareness.

Russia passed a radical new set of anti-gay laws recently which outlaw not only any homosexual activity, but any show of support or acceptance of gays. These laws are generally worded and Russia being Russia, the penalties for violating them are whatever the hell the authorities happen to feel like that day. These laws’ clear intent is repression, and violent incidents and arrests of the laws’ opponents have become commonplace in Russia. 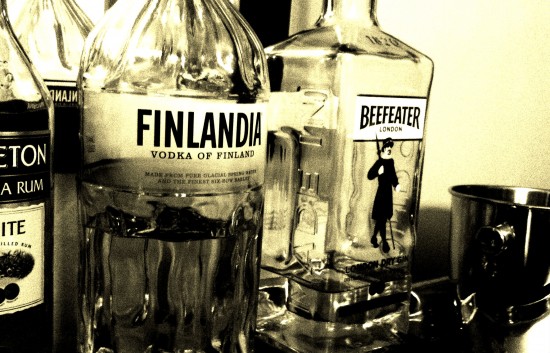 A bottle of non-Russain vodka on the Chop’s home bar.

With the way Russia and Vladimir Putin have been behaving lately, it’s not a stretch to say we should probably be boycotting all Russian products. But let’s face it: you’re not going to buy a Russian car any time soon. Ditto a Russian smartphone or suit or pair of shoes. There’s only one Russian export you are likely to buy, and that’s vodka.

Specifically, Stolichnaya vodka. In a piece at the Stranger’s website boycott founder and spokesman Dan Savage provides a handy list of Russian vodkas currently available in the US. The only one you’ve likely ever heard of is Stolichnaya. So while cable networks and lazy site editors fall all over themselves for clips of studly gay-bar bartenders dumping Stoli into the gutter, remember that this is not technically a boycott of that specific company.

And as far as slacktivism goes, being an American drinker and boycotting Russian vodka is about as easy as it gets. If you’re shelling out for Stoli in a bar (or God help you at home) it takes literally zero effort to ask for Absolut or Belvedere or Finlandia or Skyy or Grey Goose instead. As it turns out, that iconic Russian beverage is pretty popular in the rest of Europe too.

As a bar owner or retailer it might take a little more effort, sure. But literally dumping good booze is never advisable… That’s a human rights violation of its own! But would your business go under if you simply kept that Stoli in a case in the back and didn’t order more until the Putin regime ends its crackdown on LGBT people?

No. That wouldn’t hurt you much at all. And it would gain you a lot of goodwill, especially in a state like Maryland, where it is, after all, wedding season.