We’ve been thinking a lot about pizza lately. That’s probably because we haven’t been eating very much of it. Ever since we decided to join a gym our level of pizza consumption is at an all time low, down to barely once a month. So when we are having a few slices we want to make it count.

At the same time recently we’ve found ourselves subject to the dumb protestations of people who have lived in NYC at some point about how nowhere else in the world has good pizza. Nonsense. We’ve had it up to here with fake-ass pizza snobbery. After all, we’ve been to NYC many times and eaten many pizzas there and you know what? They varied in quality but weren’t really anything special. Ray’s, Famous Ray’s Famous Original Rays… who gives a shit? 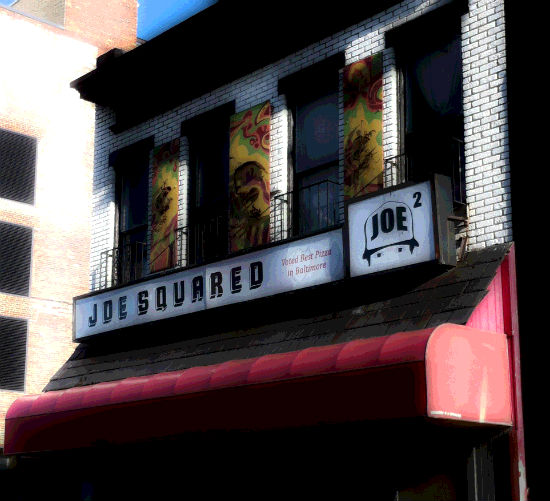 While it would be nice to see more shops locally embrace single-slice sales, there’s definitely no shortage of good pizza in Charm City. So today we present the Baltimore Pizza Power Rankings. This isn’t a typical ‘best of’ list but rather it sorts out several Baltimore pizza shops and restaurants by reputation. Of course the ones with the best reputation also tend to have the best pizza. It’s important to remember that there are a lot of places not on this list. Most of what’s listed here is very good, although some of the places near the bottom made the list by reputation alone and couldn’t be ignored.

Now without further ado, your Pizza Power Rankings, from best to least best.

1. Joe Squared- Joe Squared set the standard for excellence in pizza restaurants and has been consistently great since opening. Everyone’s got a favorite among their signature pies. Ours is the Flag Pizza.

2. Matthew’s Pizza- This small Highlandtown spot has been around forever and will come up in any conversation about good pizza. It’s been winning best of Baltimore awards longer than we’ve been alive, all well deserved.

3. Iggie’s- It’s very very rare that we’ve heard anyone mention Iggies and not sing its praises from the hilltops. We’ve always been personally impressed with out visits and being BYOB is an added bonus.

4. BOP: Brick Oven Pizza- BOP has some detractors these days but there’s always a lot to like about it. They’ve got all the toppings in the world and sell slices, even let you build your own slice. People may nit-pick their crust but they’ve been around a long time, and it’s because they run a great shop.

6. Isabella’s- This small and unassuming shop backs up to the bocce courts in Little Italy. It stays a bit under the radar, but that’s because it’s the kind of place that its large corps of loyal regulars wants to keep all to themselves.

7. Verde- Also a newcomer to the pizza scene after taking over the former Birches, Verde’s been quick to impress. The list of signature pies is staggeringly long and this place will probably stay in business forever… because quick! Name another great pizza place in Canton.

8. Birroteca- While pizza is the main feature here, the place is also known as a full restaurant and bar. Hidden down in the Jones Falls Valley near the Hampden light rail stop the place has become a must-visit for the type of people who care about foodie street cred. But that means it’s good.

9. Italian Graffiti- for the longest time the go-to pizza shop in Fell’s Point was Little Italy Pizzeria. It’s still there, same as ever, but we never go there anymore. Why would we when IG is right around the corner and about 200 times better?

10. Filippo’s/Spartan (tie)- Matthew’s isn’t the only great traditional pizzeria in Highlandtown. Filippo’s and Spartan are also in Highlandtown proper and both have been putting out great pizzas for decades. They coexist in yin-yang harmony like a steaming hot half-pepperoni/half mushroom pizza.

12. Egyptian Pizza- Egyptian has seen many neighbors come and go in the Belvedere Square area. Let’s face it, it’s not easy to stay in business in there. But Egyptian has hung on year in and year out.

13. Toss- It’s even harder to stay in business when you’re a quarter mile from Belvedere Square in Govans. But Toss earns a lot of credit by being known as the place that will deliver wood-fired artisan type pizza to most of North Baltimore. Also a BYOB sit-down restaurant.

14. Owl Bar- Owl Bar is known more as a bar and general restaurant but their giant brick pizza oven has always featured prominently. They make an understated sort of handmade pie that doesn’t look like something Guy Fieri would shove into his ugly face and moan explicitly.

15. Zella’s- Zella’s is a great place with a great reputation, loyal regulars and good pizza. It would rate more highly on this list but it is next to Hollins Market and who the fuck wants to go there? Nobody who’s not living there already, that’s who.

16. Pub Dog- Sure it’s mostly a brewpub, but it’s a brewpub with great pizza. Why would you not want to eat pizza in a brewpub? What’s wrong with you?

17. TooLouLou- An up and comer, this place just might be a contender someday. The pizza is great and the rest of the menu is cajun/creole inspired which is something you don’t see a lot of around Baltimore. This place is in Lauraville, and we get the feeling that they know it’s going to be on them to do a lot of the heavy lifting to draw in people from off the Harford/Bel Air Rd corridors. We think they’re up to the challenge. (Also BYOB.)

18. Chazz: A Bronx Original- Yeah it’s a little too Planet Hollywood for our tastes but word is that the pizza’s good at least. Plus you might bump into Derek Jeter if the Yankees are in town and have the chance to throw a pizza at him.

19. Homeslyce- “A place for slices you can call home. Welcome home: Homeslyce.” Homeslyce is decent enough to have spun off a second location on North Charles, but it’s the kind of place you walk into and see people eating weird giant strombolis and seafood pizzas and pineapple/pesto pies. Go here if Hersh’s is too crowded.

20. Maria D’s Everyone in South Baltimore has eaten at Maria D’s. It’s fed the multitudes, like Jesus with the loaves and fishes. Great Pizzeria and carry-out.

21. Angelos- We’d like to rate Angelo’s higher but it’s sort of a one-trick pony. But it’s a pretty good trick. This is the only place we know of to get a legitimately GIANT slice. And you can get one and a soda for like $5.

22. Maxie’s- This place in the former XandO at Charles and 31st feels more like a carry-out upstairs and more like a bar downstairs. That should get it a lot higher on this list but the pizza is pretty greasy and the bar doesn’t exactly distinguish itself. It’s failed to generate much buzz but has definite room for improvement.

23. Social Pub and Pie- The only time we ever hear buzz about this place is in connection with mid-week specials. But if you can get a pizza and a pitcher dirt cheap on a Wednesday then why cook?

24. Two Boots- You want your Authentic NYC place? Here you go. And you’ve got it all to yourself because there’s never anybody in there. Why would you go there when Joe Squared is a block away? Still, it’s not bad pizza though and you can mix and match slices.

25. Earth, Wood and Fire- Hidden away in Mount Washington this place looks great but how is it that we had never heard of it before we sat down to write this blog post? Safe to say the word is not on the street.

27. Bagby Pizza Co.- We’re sure it’s wonderful if you’re a financial analyst on your lunch break. But again why would we ever go here when Italian Graffiti is a few blocks over?

28. Johnny Rad’s- We feel badly rating Johnny Rad’s so low on the list because it is an excellent bar. A really, truly great place to hang out and drink beer. Unfortunately the pizza and the rest of the menu don’t match the bar’s great service and selection or live up to the overall vibe.

29. Oriole Pizza- A pretty crappy place but a great option for delivery if you’re an art student or law student.

30. Never On Sunday- Highly overrated but you could still go here if Iggies was closed for some reason.