Like a lot of people, the Chop loves some Fall Seasonal beer. Not least because a Baltimore Summer is so hot, and so full of house parties and ballgames and cook outs and last-calls that it’s the only time we can actually embrace a cheap, watery swill like Boh or PBR. We just can’t choke it down in the Winter. Part of the reason why all those tasty pumpkin ales and marzens are so good is because we’ve been drinking on the cheap all Summer and are finally ready to buy a case or two of good beer.

But in 2013 we may just be out of luck. By the time the heat breaks for good in late September this year, it’s possible that all of our favorite Fall beers will be completely sold out, and stores and bars will be carrying Winter beers. There’s a name for this phenomenon: it’s called Season Creep. 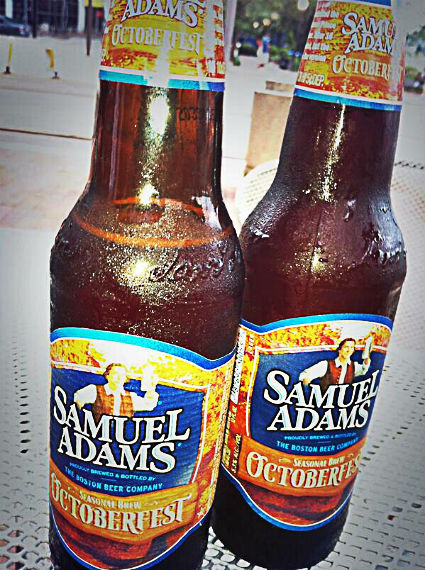 It’s way too hot to be drinking Fall beer.

We’d noticed that Fall beers have been being released earlier than they once were, but when we found Sam Adams Octoberfest near Camden Yards in July, less than two weeks after the All-Star break we knew something was afoot. Sure enough, friend of the blog and Baltimore beer expert Brad Klipner confirms that most Octoberfest style beers will be available on shelves by this week, and some pumpkin ales are available as well.

And love Fall beer though we do, this is a bit ridiculous. The weather notwithstanding, part of what makes seasonal beers seasonal is the ingredients. Pumpkin ales traditionally come out in October because that’s when pumpkins are harvested because that’s when they’re in season. Only God can make a tree, and only the Great Pumpkin can make a pumpkin, and if you’re brewing your pumpkin ale with canned pumpkin pie filling then shame on you.

It’s entirely conceivable that if this trend continues, you could stock the coolers at your next fourth of July cookout with Sam Adams’ Octoberfest. We think this is absurd, but unfortunately the Boston beer company doesn’t agree. In a statement released to the Boston Globe they defended the practice of releasing seasonals months early, and switched from selling their Winter Lager to Spring Seasonal on New Years’ Eve.

Locally it seems like most Maryland brewers are holding back in this trend as best they can, and God bless ‘em for that. But Sam Adams is the biggest little brewery and when they chart a course a lot of smaller fish are bound to swim in their wake. For our part, we’ll be voting with our wallet, and though it may be tempting, we’re going to be abstaining from autumnal beers until, well, Autumn.