1. The lead is a story about a fatal plane crash and you can navigate to it in “Flight Mode” Presented by GE. 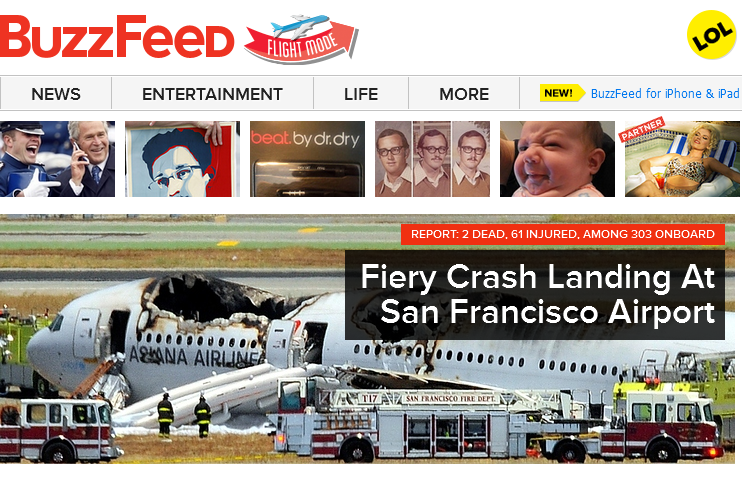 This is probably just an accident of their software making the most recent story show up on top, but come on… no editorial oversight at all here.

2. They pretend to be a news site and they aren’t. 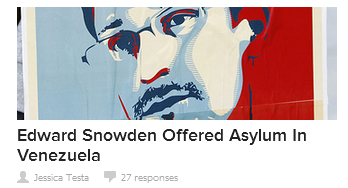 It pisses us off to no end when real (cable) news outlets have someone from Buzzfeed on as a panelist or whatever. Even getting on air is way more legitimacy than they deserve. There’s no actual original news reporting on that site at all.

3. Most of the articles are just cheap lists…

4. Some of those lists just play on nostalgia arbitrarily.

They stole this trick from Stereogum. You can pick out anything that happened in pop culture between 1988 and 2003 can make relatively young people say ‘Wow! I feel really old lol!’

5. Speaking of LOL, they use it all the time.

Surf the site long enough and you’ll feel like you’re in an AOL chat room.

6. They’re not afraid to resort to race-baiting to get clicks.

The VA lieutenant governor’s race is really national news? And why did it take them 3 months to post this?

7. They’re not afraid to gay-bait either.

They tend to take a very progressive an pro-gay stance but it still amounts to cheap pandering. 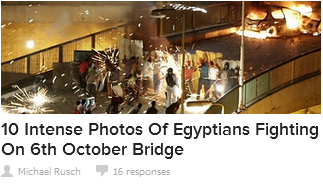 Also known as ‘Here’s a list of buzzy things we culled from the internet in the last 20 minutes. See also “I’d let Chris Brown beat me” and “Where is Baltimore anyway?”

Keyword ‘poodle’ and everyone who owns a poodle will retweet. See how that works? 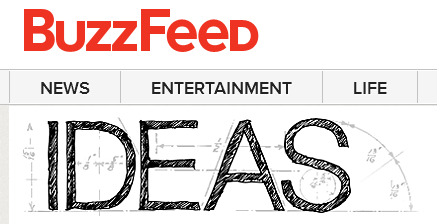 Buzzfeed has cheapened the word ideas the same way they’ve cheapened everything else. They leave the real thinkpieces to the Atlantic and Longreads though. An actual Buzzfeed idea headline is “27 Broiest Books That Bros Like To Read.” Reading, Bro.

They actually ran these 3 .gifs next to one another in one of their dumb listicles. It’s like they’re trying to give you a seizure.

On a quick count we tallied up 51 posts in the last 24 hours, and that was on a Saturday during a holiday weekend when most other websites slow down considerably. 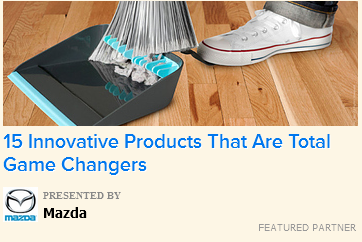 An exciting new way to disguise advertising as content, invented by Buzzfeed itself.

This list of fancy beach houses has no copy written for it at all. It’s almost like they even resented having to take 5 seconds to come up with a headline. Even in this lazy post making fun of Buzzfeed we’re still at least writing copy for each list item.

15. Doing the opposite of what they say. 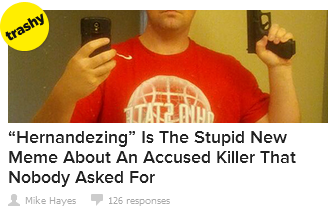 If the world doesn’t need this meme then why are you perpetuating it on one of the country’s largest sites?

Stories like this one link to external websites. Not sure why or how but they must be making a buck off it some way.

Made in New York? What are you like some kind of small-batch artisanal authentically handcrafted made in the US shitty website? Are we supposed to applaud you for not hiring Indian hacks in Bangalore to make your cute puppy listicles and pop culture garbage memes? Fuck off and die with this pretentious shit.