This past Saturday your Chop took part in the State of the Orioles Address before the game at Camden Yards against the Toronto Blue Jays. This annual event is meant as the Summer counterpart to the team’s annual Fanfest held each January, and gives season plan holders a chance to question the team’s top management directly.

General manager Dan Duquette and Buck Showalter took seats atop the third base dugout to participate in a two-man panel discussion hosted by broadcaster Jim Hunter, and spoke in general terms about the team before taking questions from the season plan holders, who altogether filled up about 3 lower box sections and two lower reserved sections with a little elbow room to spare. 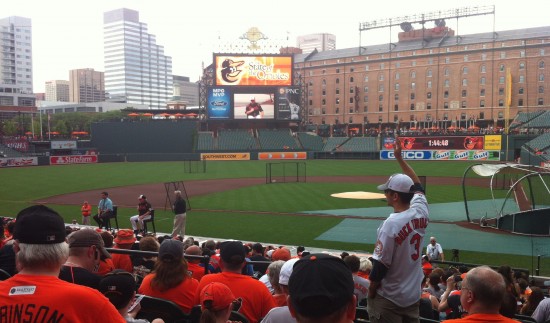 Duquette and Showalter take questions from fans during batting practice.

So what is the State of the Orioles? Unlike with politics, you can’t just come out and say ‘The State of the Orioles is strong!’ and then speechify for 90 minutes. There are objective metrics in baseball. A quick look at the standings can tell you the true state of any baseball club midway through the season. As of right now the Orioles are 53-43 going into the break, which is a pace to win 89 games. That’s good, but it’s nowhere near good enough to win the AL East. They’re going to need to find about 6 more wins to take the division, and probably 3 more to snatch a wild card.

In this blogger’s opinion the club’s weaknesses are starting pitching, second base, and DH in that order. Dan Duquette Roster Roulette has been a daily occurrence, and carrying three 2nd basemen, all of whom can turn DP’s but none of whom can hit is not a recipe for success. It would be nice to have some consistency from that position and to have someone who can come off the bench to pinch hit more reliably and powerfully than Ryan Flaherty.

Nolan Reimold is also dead weight. Nate McClouth is a great player and a fan favorite and as much as we were rooting for Nolan in seasons past he never really caught on and is useless as a fourth outfielder/DH/bench player. He should be dealt to somewhere he can be put to better use for his last real shot, which is just about anywhere besides here. 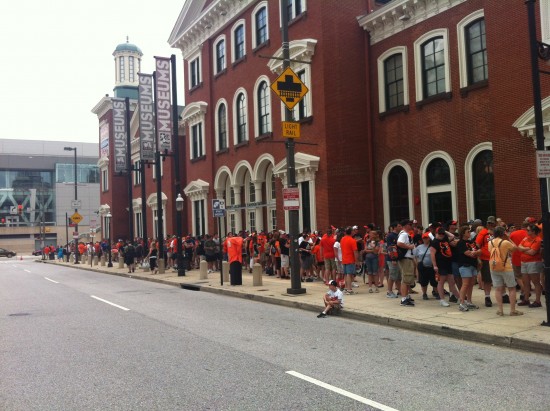 But that’s just our opinion. On to what was actually said:

The whole event had the feel of a very large, extended press conference. Although the season plan holders are typically among some of the most knowledgeable fans, the front office and Buck in particular have generated so much goodwill recently that there were not many hardball questions that demanded solid answers. Dan and Buck, who are both very media savvy and face tougher questions on a daily basis were free to exercise whatever flowery rhetoric they wanted without fear of a followup or clarification.

Jim Hunter seemed particularly surprised that fans weren’t chomping at the bit with questions right out of the box, but when the team is winning there’s not a lot to say. We expect if it had been MacPhail and Trembley up there the tone would have been markedly different.

Buck began by summing up the state of the club as “So far, so good” which is tough to disagree with. Duquette talked a bit about an organizational goal being to have “deep depth” at all levels of the minors, to which Buck agreed and stressed that it doesn’t matter where a player was drafted or at what level he’s playing, anyone who performs well is likely to be promoted.

Which led into the first direct question about the possibility of seeing Cuban defector Henry Urrutia called up from AAA Norfolk. Both indicated that they were watching him very closely, to the point where they could cite his stats from the top of their heads, and Duquette came around to saying that he’d be playing in the futures game and after that ‘we’ll see.’ It was our impression that he’ll be in the major league lineup sometime in August, although that wasn’t stated directly. 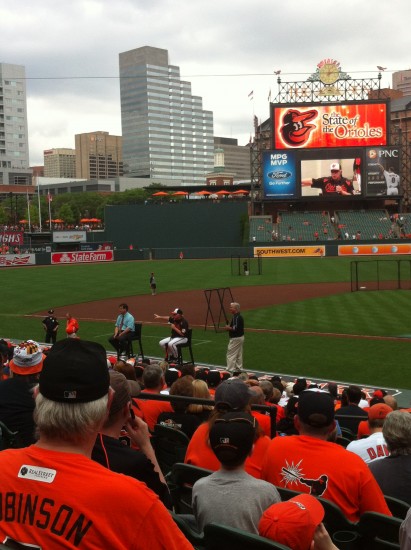 At this point some jackass said ‘I don’t know if you’ve noticed but you need a pitcher’ and went on to ask if Angelos would ‘open the purse strings’ during a pennant race. Duquette replied that Mr. Angelos is very cooperative when approached about possible trades and acquisitions, and Buck let the guy have it a little bit pointing out that the club had ‘opened the purse strings’ and re-signed Adam Jones, JJ Hardy, Nick Markakis and Chris Davis. “I don’t spend a lot of time coveting other people’s players.” Buck Said, “I like our guys.”

Not letting it go at that, Duquette did make the point that the Orioles have the depth for a trade and will be active at the trading deadline if they deem it necessary.

The rest of the questions making up the 30 minute event were a bit more general, with Dan saying things like “They don’t show up every day to play, they show up expecting to win.”

Buck praised the city of Baltimore repeatedly, and often made the point that he likes knowing about something that other people, outsiders, may not understand or know about. He described it as an honest city and a blue-collar town and said that there’s a ‘purity’ here which if other people don’t understand it’s their loss.

The scene ended on a light and upbeat note with a question about Chris Davis competing in the Home Run Derby, which led Buck to praise Davis and talk about kind of player he is and conclude by saying “I’m proud of Chris. He represents the organization and I hope he hits it 700 feet.”