We’re gonna be honest right up front and cop to this: we’ve never heard of Zisk Magazine before.

During the baseball season we typically watch an average of a little more than one game per day of actual baseball. We also watch an average of about 45 minutes of pregame/postgame/Baseball Tonight type shows on TV and follow a little bit of baseball reporting online, so seeking out baseball magazines and spending even more time with the Pastime isn’t really a high personal priority.

But Zisk bills itself as ‘the baseball magazine for people who hate baseball magazines’ so that made us sit up and take notice. According to this event’s press release Zisk features ‘contributions from academics to punk rockers, comedians to fans with an ax to grind.’ And Fan Interference, an anthology of content from the zine “examines the intersection of baseball, lifestyle and music all colored with bit of nostalgia, a great deal of humor and, often, a tongue planted firmly in cheek.”

You could say the same about this site, when you think about it. 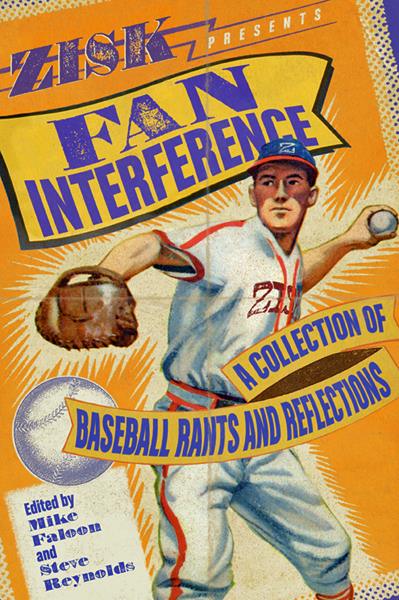 Fan Interference’s publication was Kickstarter funded, and contributing authors Mike Faloon, Steve Reynolds, Nancy Golden and Charlie Vascellero are celebrating the release by taking the book on a tour, which makes its Baltimore stop at Atomic Books tonight from 7-9 pm.

If, like us, you’ve never heard of Zisk this is a good opportunity to snag a signed copy of Fan Interference and just read that rather than trying to track down back issues an buying them piecemeal. Plus the event is sponsored by Bugs and Cranks which is a most excellent independent site that covers all the MLB teams from a clever fan perspective.

So if you couldn’t score a rooftop bar seat at the Yard tonight, pop up to Atomic and have a beer with some top-notch baseball writers instead. You can even catch the late innings of the Oriole game on one of the 30+ TV’s next door at David’s 1st and 10, which is a new addition to the neighborhood and an excellent bar for watching the O’s.