It’s always a weird feeling when a holiday isn’t on or book-ending a weekend. It’s like a stutter-step, with most people not knowing whether they should be in full on weekend party mode or not. It’s also hard to know what’s open or closed, and of the things that are open most everybody wishes they were not there.

But starting tomorrow it’s no longer a kinda-sorta holiday weekend and just becomes more of a regular weekend, with people doing all their regular weekend activities like going to punk rock shows, such as the one we’re going to tomorrow at the Metro Gallery. 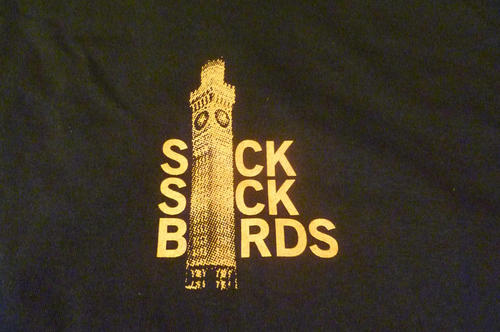 Baltimore’s own Sick Sick Birds return to Metro tomorrow, and will be playing a nice mix of stuff from their recently released All the Fins in the Sea EP and last year’s full length Gates of Home. And if the chance to see them play wasn’t enough enticement to show up tomorrow then you should know that you can also buy this shirt at their merch table. And look at it… it’s beautiful. This is easily the coolest Baltimore themed shirt we’ve seen in 10 years or more.

We’re not sure if you’ve noticed, but between knockoff Boh crap and unlicensed Orioles and Ravens gear and the proliferation of online shirt makers and meme culture the streets of charm city have been absolutely flooded with crappy Baltimore-pride shirts. Make a mental note of it and go to Artscape this year and see if we’re wrong. We’re definitely going to pick up one of these beauties, even if the only place we wear t-shirts anymore is at the gym.

Also up tonight at Metro Gallery is DC’s Title Tracks, featuring ex- Q and Not U Drummer John Davis. We’re not sure if they just usually stay out of Baltimore or if we’ve just been missing them or both but the last time we saw Title Tracks was way back in March 2010 when It Was Easy had just come out and they still sounded like a raw, new band. Their second full length on Dischord, In Blank has a decidedly Ted Leo/Wipers kind of feel that makes them a perfect choice to split this bill. We’re excited to see how far they’ve come since the last time we saw them, and you should be too.