We told you yesterday how we’ve finally and completely given in to Adulthood and joined a health club. The thing about adulthood though is that once you give in and accept it you find yourself becoming really excited about things that used to seem mundane. Like thermostats.

So at the risk of sounding just like our dad, we’re going to come out and say that we’re really excited about our new thermostat here at the Chophouse. We ordered a Nest last week and we already love it right out of the box.

Despite the fact that the Chophouse was newly renovated when we moved 3 years ago, our old thermostat looked like a bit of cutting edge technology from 1983. It sort of reminded us of a cheap digital sports watch; it had 45 functions but only 3 buttons, and we were left to guess at which button to push and how (push it? push and hold? push twice?) to make the temperature move. On top of that it ran on batteries, so if we went to sea for months on end and the AAA batteries ran out, the furnace stopped working entirely. Not an ideal setup.

So it was with sheer glee that we ripped it right off the wall and threw it into the trash. Not only is the nest a giant leap forward technologically, as you can see it also looks pretty sharp in the Chophouse.

(It should be noted too that most of the time the screen is blacked out. It only shows the display if you’re standing in front of it.) 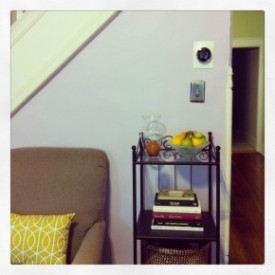 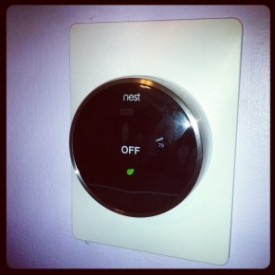 Worrying about batteries dying and the house freezing over is a thing of the past now. In fact, we’re done worrying about anything thermostat related because we can now see and control our furnace from halfway around the world with our iPhone. The Nest works with our home wifi network, meaning it can be controlled and adjusted from any smartphone, tablet or computer, including the one you’ve got under the blankets with you on a cold February night.

But perhaps one of the nicest things about Nest is that it’s really only as high tech as you want it to be. Sure, has a motion sensor and it can be controlled remotely and it knows the weather forecast for its location and can learn your habits and adjust itself and can email you energy use reports… but it doesn’t have to. Even without a wifi network at home it’s still a gorgeously designed and full functional thermostat that’s easier to read and adjust than the one on your wall. Perfect for multi-generational homes, mom can set patterns and view reports on her tablet, while grandpa sneaks up to it and just turns the dial manually when he gets cold.

The Nest was almost as easy to install as it is to use. We opted to snap it on with the fairly large trim plate and steel bracket which were included, and the whole thing only took about 30 minutes. In fact, it was so easy we may take it apart again and do the spackling and painting required to put it right on the wall. Old Baltimore rowhouses though… sometimes it’s best to let sleeping walls lie.

We’re thrilled with our Nest and we think it’s the kind of small investment that can really boost a house’s overall value and resale appeal, and of course its present livability. Our only regret is that without central air conditioning at the Chophouse, we’ll have to wait until October to really start playing around with it.

We’d like to thank Nest for providing our review unit at wholesale cost.