Around the Chophouse we don’t typically do a lot of TV watching. At least, not a lot of prime-time TV watching. We like to watch the O’s of course, and more than a healthy dose of MSNBC although that’s mostly just background noise. Other than that we like a little Comedy Central before bed but that’s about it.

So you wouldn’t figure us as the type who’s on the leading edge of technology, but at the same time we can see the writing on the wall and we’re so far behind technologically that it just makes more sense to take a great leap forward. When we moved into this house in September of ’09, we were lugging around a 50 pound hand-me-down TV set with an analog antenna and a built-in VCR, both of which were already obsolete.

At this point we’ve got 3 flatscreen HDTV’s set up in the house, but we never did make a successful transition off of VHS. Our considerable collection of videotapes ended up in a landfill somewhere, but we only ended up with 1 modest DVD player, and never even thought about blu-ray. Then Blockbuster went belly up, and the country’s single convenient source of cheap used DVD’s disappeared when we’d only built our collection to a couple dozen. 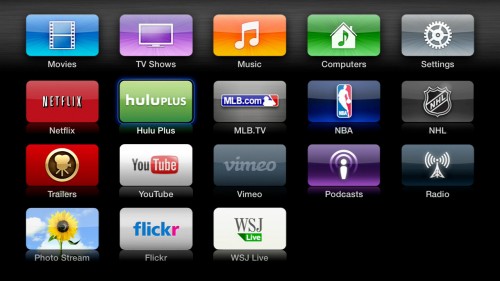 The home screen for Apple TV is clean and simple.

After a little more than a year as a Netflix subscriber it occurred to us that we’d be the perfect candidate for a so-called set-top box or buddy box. We have the feeling that pretty soon DVD’s and even blu-ray discs are going the way of VHS. The Cloud is already here, and it’s only a matter of time before people decide they want to quit paying $20 apiece to pile up more plastic crap in their living rooms.

So we’re in the cloud, but the big question now is which cloud? There’s a large selection of devices out there, but unfortunately they are all in their infancy and have a long way to come. Also no clear market leader has emerged the way the iPod took over the ‘mp3′ player market. So we decided we’d get two different ones and pair them against each other head to head. The winner might get bought again. The loser might go on Craigslist (or at least get moved into the office where it’ll be seldom used). It’s too early to report full results, but here are some of the early notes.

We’ve had very mixed experiences with Apple products in the past, loving our iPhone and being incredibly sore about some other devices. We’re already developing a love/hate relationship with our Apple TV. We bought it primarily to stream Netflix, and it does that really well. Most people’s biggest complaint about Apple TV is that the minimalist remote makes typing a chore, pecking out one letter at a time on the screen. That hasn’t been an issue for us since we’ve installed the Remote app on our iPhone. It’s allowed us to ditch the Apple TV’s remote entirely, controlling the box from our phone with a pop up screen keyboard and all.

Unfortunately, it also serves as a constant reminder that Apple products don’t always work as well as they boast. Remote can’t quite sync up with our iTunes library, and the Apple TV itself is hit or miss about being able to identify and play over home sharing. One thing it does do though is pick up the Photo Stream from our phone, which our laptop has never been able to do. Home sharing between the phone and (Windows) computer is also a no-go for us, and after hours and hours of searching for solutions online we’re resigned to the fact that we’re probably going to have to go to the Apple Store and beg a ‘genius’ for help with all our hardware in tow.

We also can’t access Airplay, as it’s only available on iPhone 4s and above. It would be nice to be able to transmit Safari from our phone to the TV, but we’re going to have to wait until we’re eligible for an upgrade to try that.

Apple TV provides direct access to the iTunes Store for movies, with credit card information on file shopping is simple and buying is a snap. That’s no mistake. The Apple TV isn’t so much a platform for you to enjoy yourself as it is a platform to sell you content, mostly at extremely inflated prices. We’re not sure we want to start buying many movies from Apple, since their digital coding forces us to be more and more beholden to Apple with each purchase. 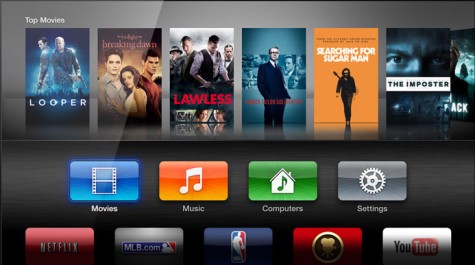 The only reliable source of free content from Apple is podcasts, although even as podcasts come into their own they are very much audio-centric and not the sort of thing that plays well on television. Aside from a few newsy programs like Rachel Maddow, there’s not much there video-wise.

We like that there are native apps for MLB, NHL and NBA, although these are of course a separate subscription fee for each. Highlights and standings are available for free though, which is a handy feature.

The remaining native apps that work well are Hulu Plus, Youtube and Vimeo, although without a Hulu Plus subscription it doesn’t work at all. We’ll probably end up with one, because at $8 a month it basically pays for itself after you watch 1-2 movies. Beyond that though, there’s nothing. There’s no app store for Apple TV, and no one seems to be developing additional apps for it.

At $99, a love/hate relationship was what we expected, and it’s pretty much what we got. It’s also what we’re getting so far from Google TV, but that’s a story that’s going to have to wait for the next post.