Now that June is here Summer is in full swing in Baltimore. Long gone are the days of spending whole Sundays in the kitchen, boiling soups and sauces and baking and generally trying to make the kitchen as cozy as possible. Our kitchen is no longer cozy: it’s hotter than Satan’s nutsack. We’d like to spend as little time in there as possible this Summer.

But how do we do that without subsisting until September on a diet of Papa John’s and bar food? Simple- it’s time to buy a grill.

We probably should have sucked it up and purchased a grill years ago. We’ve always made the same excuses time and again: it’s a bitch to clean, you’ve got to buy charcoal, it takes too long to heat up, hell- we don’t even eat meat. But no more. This Summer we’re in the market for a grill, and like most inner-city residents our space for grilling is severely limited. Being pretty much confined to decks and porches, we haven’t even got space to keep a grill at all. Anything we buy is going to have to go into the basement for storage, but as a bonus it can go to the beach or the tailgate just as easily.

Here are some of the models we’re looking at, one of which will probably be on our deck firing up asparagus and veggie kebabs by this weekend. 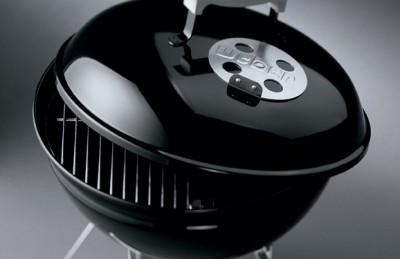 The Smokey Joe is the scaled down version of Weber’s One-Touch series, which is the classic American grill. Hell, it’s the grill we grew up with. Weber is pretty much the Nascar of grills in that its all bells, no whistles standardization highlights the skill of a cook over the technical specs of the grill. If you can’t cook a good burger on a Weber, it’s your own fault. 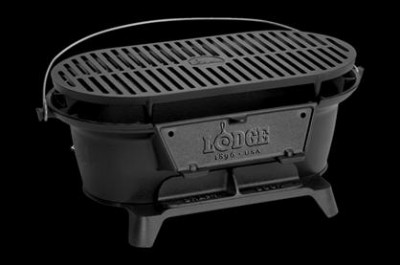 Priced at around $150 the Sportsman’s Grill is several times more expensive than the Weber, but one gets the feeling you probably get what you pay for here. Weighing in at almost 30 pounds, the whole thing is cast iron and will probably be around the house long enough to cook for our grand kids. With a fold-out door for additional coals, this thing is just as comfortable handling burgers and dogs as it is doing duty as a hibachi on stir-Fridays. But as one reviewer points out on their website it doesn’t have a lid, which means that when the grill is cool it’s a buffet for cats and birds and other urban fauna. 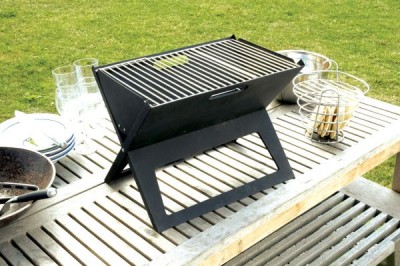 All things considered this is probably the grill we’re going to end up with. At around $35 it folds completely flat with the grill grates inside for portability and storage. While it’s big enough to do six burgers and as many dogs at once, it’s also small and light enough to fit on an old TV tray. It’s even available in your choice of black or stainless steel finish. 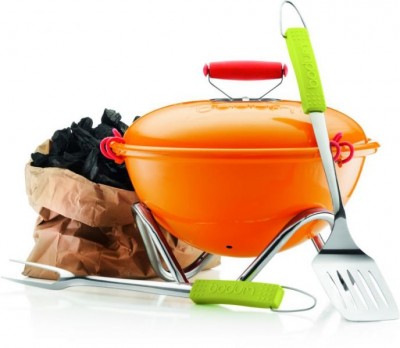 If the Weber Smokey Joe is your father’s Oldsmobile, Bodum’s FYRKAT is a Scion TC. It’s the same basic grill type but with stylish design updates and brighter colors. The low-profile lid takes up less space, as well as clamping down to the grill itself for grab-and-go convenience. 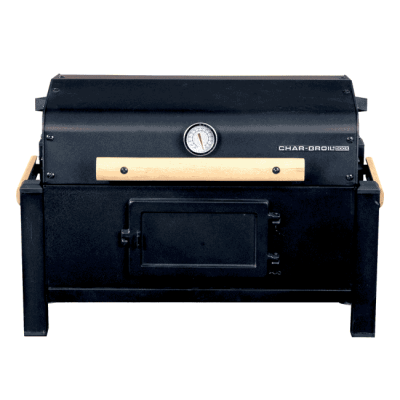 Even bigger and badder (and heavier) than the Lodge grill listed above, The CB500X probably isn’t destined for the Chophouse, but if you’re a serious cook with limited room it’s going to be hard to beat. With two separate grates, a coal door, and an integrated thermometer this thing is basically a scaled down version of a world-champion barbecue grill. Forget entertaining friends, with an included smoker box inside it’ll enable you to go out and win barbecue competitions, or put it in the back of your pickup and open your own cutesy gourmet food truck.