We’ve got a case of the Mondays today. We don’t really feel like going anywhere and or doing anything the least bit trying or even writing this blog post. And the Mondays are especially bad this week, since this past weekend was probably one of the best we’ve ever spent, at least in recent memory.

Saturday we were lucky enough to attend the wedding of a great friend, which we don’t mind saying was the most elegant and perfectly planned party we’ve ever been to, and was exactly like stepping into the pages of Garden and Gun. Such a great Saturday was followed up with two brunches and a round of golf on Sunday, and through it all your Chop was driving a fancy German car and had a pretty girl on our arm. So, you know, it’s fair to say we’ve made some right life decisions somewhere along the way. 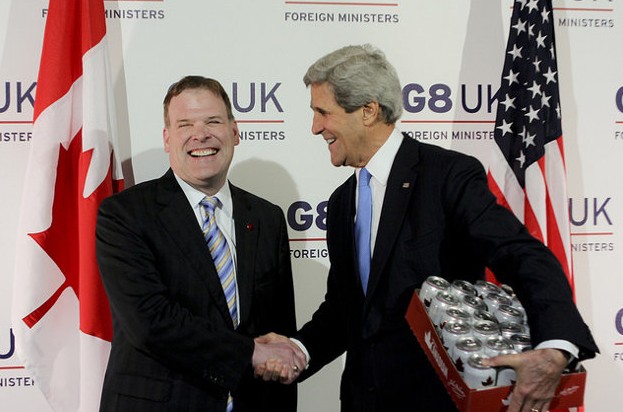 Secretary of State John Kerry collects a case of beer from the Canadian foreign minister after a hockey bet.

And since we’re feeling pretty lucky right about now, this is as good a time as any to go ahead and publicly declare our affinity for the good old-fashioned friendly wager.

You see, our round of golf was complimentary yesterday; taken care of by another good friend who lost a wager to us back in November. We predicted on this blog that president Obama would end up with 323 electoral votes. Our friend didn’t believe it. On election day Nate Silver was giving the president around 308 electoral votes in his predictive model, so we placed an over/under bet at that number and the rest is history. Obama won pretty much every swing state and ended up with 332 electoral votes in a crushing and humiliating landslide over Mittens Romney and we wound up with a free round of golf.

But it got us thinking; why should this be an uncommon occurrence? We ought to be collecting free shit all the time on the power of our prognostications. Once upon a time when men were men and cash was king friendly wagers were made with regularity. Not only do they make something mildly interesting a lot more interesting, but there’s satisfaction on both sides in that one end collects, the other has the fulfillment of keeping his word.

So we’re resolved to wager more from here on out, and it’s in that spirit that we present the solemn rules of wagering. If any of you would like to lay a wager according to these rules, go ahead and make us an offer. We just might take you up on it.