You don’t have to listen to any Classic Rock radio station for very long before you realize that every single one of them is drawing from the same 200 song playlist every single day, and has been for the last 30 years. That’s because the Baby Boomer generation is all shitty people.

Part of their shittiness is that after they turned 25 they just stopped listening. They were perfectly content with their AC/DC and their Aerosmith and when rap music really broke big around 1990 it scared most baby boomers shitless to the point that they never again listened to any new music on purpose. Seriously. Go ask your parents to name a ‘new’ rock band and they’re probably going to say Green Day or Foo Fighters or some other band that’s more than 20 years old.

We’re determined not to let that happen to us. Even though we’ve spent the first part of adult life building an iTunes library that could easily carry us through the rest of adulthood without many new additions, we’re still seeking out new bands to see and new records to buy.

This week our search is as intense as ever, partly because we’ve just come home from so long at sea, and partly because between a flurry of new releases last fall, and another flurry set for Spring, we’ve got a lot of catching up to do. We’re calling it now: in November and December all the hypey music publications’ yearly “top albums of the year” articles are going to be better than they have in recent memory. There’s going to be a lot more material there to work with. 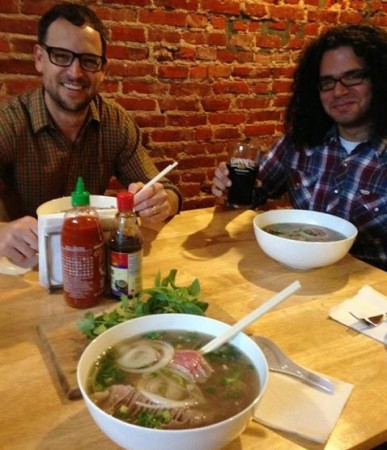 Don’t pho around. Pick up Modern Girls’ self titled LP as soon as possible.

Hell, we’ve got our hands full just with Baltimore music, and it’s only May. We can’t possibly list in one post all of the music we’re excited about in Charm City right now. We can’t even whittle it down to a top ten list. But what we can do is give you 5 examples of what’s playing on repeat at the Chophouse this week.

Mind you: this isn’t all that’s playing on repeat this week. We’re purposely omitting from this list some bands who we’re friends with and thus heard plenty of before. We’re also omitting bands like Double Dagger, who have new music out but were/are breaking up. We’re also leaving out stuff that we’ve mentioned already in earlier posts this week. Out of what remains, here are the top 5 bands that we’re not only listening to now, but we expect we’ll be listening to well into the future.

With former members of Ruiner, Never Enough, and too many other bands to name, there wasn’t a whole lot of lag time between Old Lines’ formation and the release of their debut LP, which came out late in November. Since then they’ve been playing often in support of it and we have no doubt their sound has only gotten tighter since the last time we saw them in the Fall. It almost even reminds us of Sepultura at their best: heavy music for people who don’t (exclusively) like heavy music. Catch them live this weekend. Friday they’re at Maryland Death Fest and Saturday at the Sidebar.

Us and Us Only

Us and Us Only is named after an album by the 1990′s British band the Charlatans (UK), and in short they sound like a band who would name themselves after a Charlatans record. And we mean that in a good way. We’ve always liked the Charlatans, and for our money they were better than Oasis, Blur and Radiohead combined.

Us have kind of been hiding in plain sight here in Baltimore for a few years now. We suspect it’s because they’ve been lumped into the ‘folk’ music ghetto and so we couldn’t hear them from our snug little spot in the ‘punk/indie’ ghetto. Dark Cloud Past is barely folk-y at all though, and by the time you reach the midpoint of this record and hear the violin melody on You Were a Writer it becomes obvious that this is a band that does things deliberately, and has been adding new layers to their sound as time goes by. Altogether excellent listening. See them this friday at the Ottobar.

Don’t look now but Roomrunner’s about to take over the world. They’re not doing anything revolutionary here, and won’t be the long heralded saviors of indie rock, but they’re one of the most exciting bands playing right now for good reason. Roomrunner has mastered the art of sounding both tight and loose at the same time, and watching or listening to them play is akin to driving as fast as you can down a dirt road in a ’70′s muscle car with no doors, no muffler and a slippery clutch. You might not have all the parts tuned to precision, but no matter how loud and dirty the ride gets you’re still having a blast.

Their first proper full length, Ideal Cities comes out on Fan Death Records (pre-order at link) next Tuesday, and they’ll mark the occasion with a release show at Metro Gallery on Wednesday, May 29.

Speaking of Roomrunner’s record release, Wildhoney is on that bill as well, which is convenient for us because they might be the one band in Baltimore we’re most curious about. The tracks they’ve put online so far are interesting, but the recording quality isn’t quite up to snuff. We’re willing to forgive a lot though for a female-fronted grunge outfit that’s reminiscent of the Vaselines. We expect they’ll sound great live.

You’re going to be hearing a lot more by and about Modern Girls over the Summer and beyond. The vinyl version of their self-titled LP isn’t available until June, but we say click over and buy the digital right now while it’s still a name-your-own-price download. In the vein of LCD Soundsystem and the Postal Service, this is the sort of thing we don’t usually pay much attention to (but probably should).

The recording and production here are of very high quality, and the band all but comes out and says right away in their 5 minute, slowly building opening track Ties and Shoes “Hey you, straighten up and pay attention now. We’re serious about what we’re doing here.” The rest of the record is sharp and consistent enough to not only hold our attention all the way through, but to keep us coming back for more. You can check them out live July 12 at the Windup Space.