This is what we’re doing today. This thing in the poster. Literally. We’re throwing a sea bag over our shoulder and climbing up a gangway and sailing halfway around the world.

Some of you reading this already knew that. For others, it may come as a surprise. That’s what we’ve been up to when this blog goes through its periods of months-long hiatus. We’ve been at sea. We’re a sailor. A merchant marine. 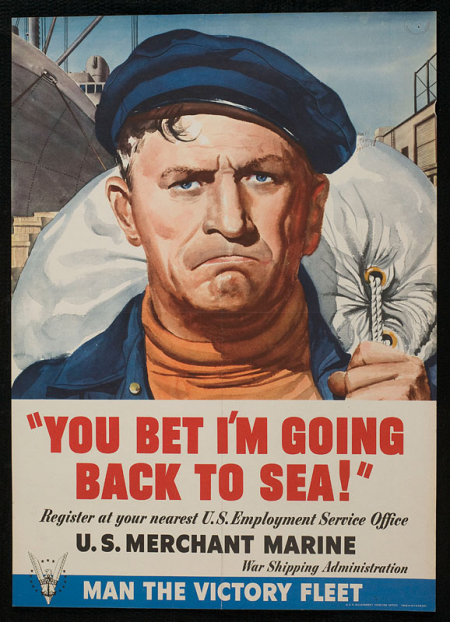 We’ve done some pretty incredible stuff that we haven’t seen fit to talk about until now. We’ve sailed around the world on a circumnavigation. We’ve got a merchant marine expeditionary medal for carrying cargo to Iraq. We’ve had close calls with pirates and been to some of the most remote islands on earth. We’ve suffered through hurricane force winds and 40 foot seas. We’ve got a Shellback card.

We’ve seen the head of the Great Lakes and the end of the Mississippi Delta. We’ve steered great ships through the Panama Canal and the Suez, through the Straits of Malacca and Gibraltar and around the cape of Good Hope.

We took a 50 year old steamer and ran it aground on a black sand beach for shipbreaking. We’ve had our life threatened by surly longshoremen and been invited on dates by exotic women. We’ve seen the holiest sites in the world in Jerusalem, the homeland of Gandhi in India and the site of the Launching of the Mayflower in England. We’ve spent Christmas in the slums of Sierra Leone and New Years’ in a freezing North Sea town in Germany. We’ve seen the heights of riches in Tokyo and Dubai, and the depths of poverty in Karachi and Kingston.

Taken together this all sounds a bit fantastic, but it is all true. The romantic world of the sailors’ life- from the Phoenicians and Sindbad, to the Age of Exploration, to Melville and Conrad to the Post-Panamax era- is still alive and well. We’ve done all of this, and we’re going back for more.

We’ve kept mum on the subject until now mostly because this is an anonymous blog. Over the last year or so, our anonymity has been compromised enough times that we’re now more of an Open Secret. If you’re reading this and just now putting two and two together, just keep it to yourself, okay? It doesn’t need to be broadcast all over town.

They that go down to the sea in ships,

that do business in great waters;

these see the works of the LORD,

and his wonders in the deep.

For he commandeth, and raiseth the stormy wind,

which lifteth up the waves thereof.

They mount up to the heaven,

they go down again to the depths:

their soul is melted because of trouble.

They reel to and fro,

and are at their wit’s end.