An unusual turn in our daily schedule had us heading uptown in the early afternoon yesterday, and it finally afforded us a chance to grab lunch at Land of Kush.

It was pretty good, by the way. Good vegan food and big portions of it for reasonable prices. It was very much like the Yabba Pot used to be before they got all lazy and complacent and expensive and eventually closed down. When it first opened, the Yabba Pot was a great place to grab a casual bite, and Land of Kush fills the hole it left more than adequately.

Now, the place has been there two years already. You would think we would have been in there before. Hell, we’ve been vegetarian for almost 20 years now, and there are like 3 veg restaurants in the city- so you’d think we’d be a regular. But alas, yesterday was our first visit. 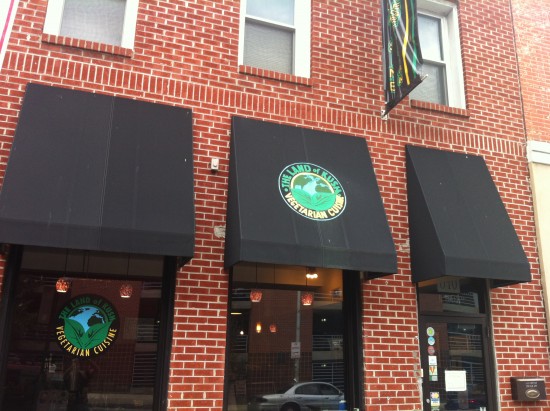 You can come up with any number of excuses about why we haven’t made it in. Because we live near One World Cafe or because Kush closes sort of early for dinner or because it’s kind of in the middle of nowhere even though it’s right next to Mount Vernon. But the real reason we never went in there before is because we get stuck in our crummy little rut and we’re happy going to the same 6 places all the time. That’s got to change.

You would think that in a city this size we could make it to every conceivable bar or restaurant or merchant at least once. At least to pop in for a drink or have a look around. And that is very possible. It’s just hard.

It’s hard to be tempted into the unknown when you’ve got something you like as much as One World or The Food Market right close by. That’s what it’s like in Baltimore- your local bar, your favorite restaurant, your barber or your bookstore or whatever. It can be hard for new businesses to break through because everyone has their favorites and keeps going back to them; and most people’s favorite places have been around for a long time.

There’s plenty of interest in new places, internet buzz and Groupons and grand openings and all of that. But the shine wears off pretty quickly. Word of mouth is still a powerful force, and once the buzz wears off it’s and the word is on the street, it can be tough to build on your new reputation, and nearly impossible to match a reputation that might have 20 or 30 years’ standing or more. This is why when Best of Baltimore polls come out every year they’re dominated by ‘perennial favorites.’

This was all running through our head while we were sitting there chewing on our vegan barbecue and collard greens, and we decided we needed to do something about it. We’re not going to wait for the New Year. We’re going to make a resolution right now, today. We are resolved to go to more places we’ve never been to before.

We’re just sick and tired of seeing so many places shut their doors and saying “You know, we always meant to go there.”