As we mentioned yesterday, the city of Superior, Wisconsin prides itself on the number of bars within its limits. One needn’t visit more than a few of them to realize that they’re all strikingly similar. They’ve all got the same cheap tile floors, the same low-grade wood bar and vinyl stools, same neon signs and promotional hangers from the same beer distributors, and the same aging, overweight barflies hanging around drinking cheap domestics. There’s nothing fancy there: no music, no dancing, no $12 pre-prohibition cocktails made of organic spirits and handmade bitters.

All of these bars do have one thing we don’t have here though, something we’d never even heard of until we found it in Superior… the Shake a Day dice game. 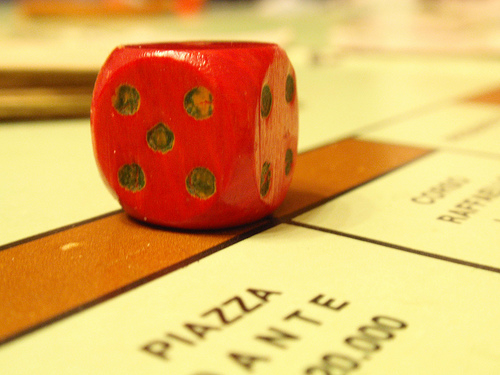 It’s pretty simple really: they have a cup of 5 dice behind the bar and a big jar full of money. You put fifty cents or a buck in the jar (depending on the bar) and the bartender gives you a chance to roll the dice. You can only buy one chance a day, hence the name.

It works like Yahtzee. Three rolls to make a “hand.” We’re kind of cloudy on the exact rules, but if you get 5 of a kind you win the pot of money. Lesser winning combinations can result in lesser prizes, and common offerings are a free beer or a free shot of some sort.

From what we understand, the game is not exclusive to that area but is popular throughout the North, from Ohio all the way out to the Dakotas. Fun as it is, we don’t anticipate that this kind of low stakes gambling will make its way to Maryland anytime soon. We wouldn’t mind if it did though. The next time we walk into a tavern and see a cup of dice on the bar, we’ll be glad to toss a buck in the pot and take our chances.