First there was just the urban landscape. Here’s an old train station and here’s a little patch of grass and here’s a statue and a few old brownstones around.

Then somebody got the idea to fill the landscape up with art. They called it “Artscape.” It was a pretty good idea and a lot of people liked it in Baltimore City.

Then Wham City came along, and said ‘We are not Baltimore City. We are Wham City. So we’ll throw our own Artscape and call it “Whartscape.” It can be short for Wham City Artscape or something.’ So that was fun while it lasted.

Then when it was over people said ‘Hey I miss that let’s do it again.’ And they called it ‘Ratscape’ because if you rearrange the letters in the word ‘art’ they can spell ‘rat.’ And it sounds better than ‘Tarscape.’ And because, RATS.

And that’s this weekend. 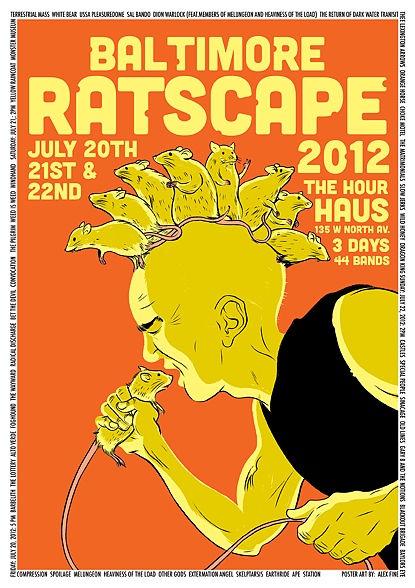 There are 44 bands playing at the Hour Haus. Here are their names:

If you can’t decide, just do both. Or do neither. Wait till Scapescape. The scape of all scapes.