Update: Presumably because of the water main break and the extreme heat and the generally shitty state of affairs in Baltimore City this has been postponed until August 15. Not exactly a banner endosement for living and working downtown, but that’s a matter for another time.

Hey Baltimore, c’mere a minute. No closer. C’mere all the way. We’ve got a secret to tell you. A little secret we’re going to whisper in your ear just between the Chop and you and the internet. So listen close and don’t tell anybody, okay? The secret is this:

You see, we bought a bunch of furniture that we did not win for free. And then we had some grown folks problems besides. And we haven’t actually had a job for a few months now. And no one has given us a bunch of money for blogging yet. So we’re broke. And we’re looking hard for our ticket out and will soon be back abroad seeking fortune and adventure once-a-more. 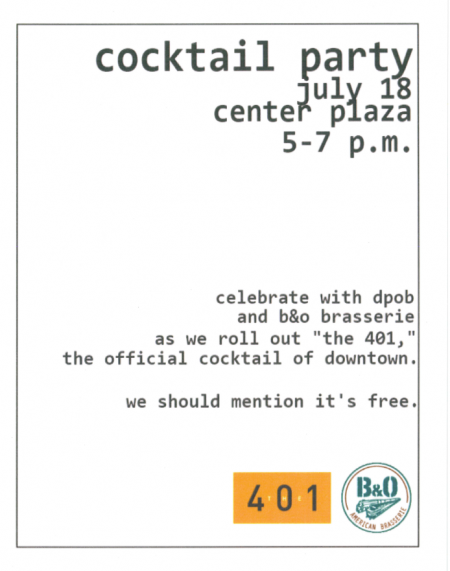 If this blog is about anything, it’s about the art of living well. Sometimes that means fancy rooftop bars in the big town and sometimes, like today, it means figuring out how to drink for free.

Fortunately for us, today it’s not very difficult. We’re out pounding the pavement and looking for gainful employment anyway. Our daily cycle commute just happens to take us right through Center Plaza and up Park Avenue. We ride through the 401.

What the hell is the 401 you ask? Good question. It’s some fancy new rebranding of downtown or something. We don’t know. It sounds a lot like ‘The 410.’ Whatever- we didn’t make it up. Maybe dopey newspaper columnist Dan Rodricks can explain it better.

So basically, the Downtown Partnership and the luxury condo types want people to move downtown. So they hired this band songs that kinda-but-not-really sound like the Pixies and they got that “bar chef” guy to make a new drink and today from 5:30 to 7:30 they’re going to give them away along with a bunch of free beer and wine and of course plenty of Downtown booster promotional material.

Sometimes living well means being a man of means. And sometimes it just means casting your net downstream in the river of corporate money that flows through major urban centers. If our corporate betters are going to be beneficent enough to provide us with free booze on our way home, we’re going to be civil and polite enough to show up and drink it.