As we mentioned yesterday, Baltimore is smack in the middle of a long and miserably hot Summer. Temperatures have often been in the triple digits lately, and a Baltimore Summer being what it is almost every other day has found us on our way to a house party, cook-out, DIY show, festival or BYOB something or other. And this summer more than ever we’re showing up with a six pack of cans in hand.

Like most people, we’ve never thought much of canned beer. It had its place, and was usually drunk more by necessity than by choice. When Oskar Blues caught on in 2002 with its flagship Dale’s Pale Ale in cans, we thought “Hey, that’s great, but cans are mostly for hot weather, and this is a heavy goddamn beer to be drinking in the sun.” So that was that. 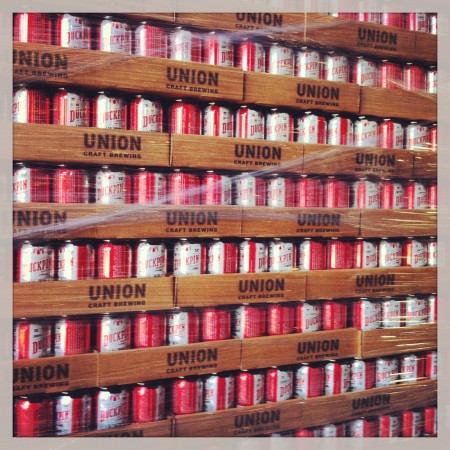 For years Oskar Blues practically stood out like a sore thumb on the can shelf among so many Buds, Millers, PBR’s, etc, but in the last two years or so the availability of good beer in cans has grown exponentially, with more craft brewers embracing cans all the time.

Most articles you’ll read on this phenomenon will have one or more very lengthy, very boring paragraphs comparing the merits of cans vs. bottles. As we’ve said before, we are not a beer snob. We don’t care at all about storing beer in our cellar or the possible effects of bisphenol-A. We just want to buy some beer that’s pretty good and drink it.

In this blog’s opinion, there’s now enough evidence to declare that there was never anything wrong with cans in the first place. It was the shittiness of the beer that made the beer taste shitty. Not the can.

Much like its counterpart good boxed wine, cans are cheaper and easier to produce and ship, making them less expensive to buy at the store. It’s safe to say that we’ll be drinking canned beer for the rest of the Summer, and probably long after as well.