One of the biggest benefits to cycling is the ability to notice things that would be missed passing by in a car. Whether it’s something as small as a makeshift snowball stand or as large as Sherwood Gardens, There’s an entire world waiting to be discovered outside your car.

We happened across one such random discovery recently, and were at once impressed and bemused by something that’s been hidden in plain sight all along. 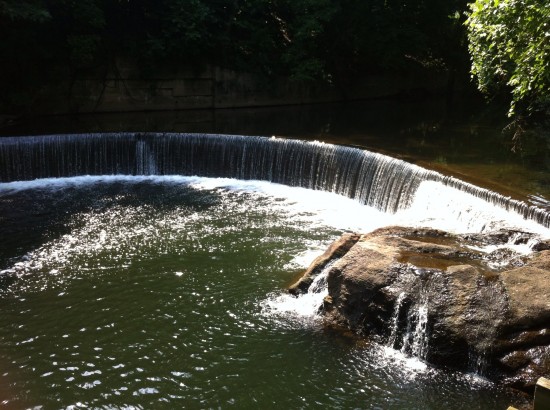 Round Falls is an urban oasis that's much closer than you think.

We’ve passed by Round Falls literally hundreds of times. Most of those were in a car, but even accounting for the several dozen times we’ve been past it on a bike we’ve still never given it much thought. As you can see on the map, It’s set back from the road quite a bit. Like the rest of the Jones Falls it’s well hidden and not very inviting.

Usually if we’re riding down Falls Road it’s because we want to get downtown in a hurry. Last week though, we took a trip that way and decided to see exactly what was behind this sign.

After descending a long makeshift staircase carved into the steep hillside, we came upon the kind of hidden alcove more fit for a storybook than a post-industrial city. The man-made waterfall is surrounded by greenery and is beautiful in all respects.

Unfortunately, the observation deck from which you’re meant to view the falls, as well as all of the other facilities nearby are as rundown and ugly as the falls are beautiful. The Observation deck itself is absolutely encrusted in the accumulated filth and grime of years. The seating area is covered entirely in graffiti, Trash is strewn about liberally, and the access stairs are wanting maintenance. Perhaps most distressing of all, the safety railings which stand between observers and the water are crudely constructed and inadequate. Some are very loose, and one is missing entirely. 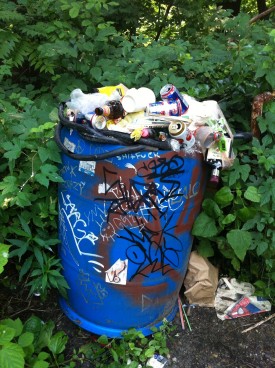 Trash is seldom, if ever, emptied.

Safety railings are absent or in need of repair.

The cost to build something like this must be in the hundreds of thousands today, yet now we as a city already have it built and can’t be bothered to spend a very few dollars and a small amount of hours to maintain it. Bringing this place back into good condition could be accomplished by a small public works crew on a single truck, or even by a dedicated corps of volunteers.

This kind of urban retreat could be a regular destination for cycle commuters around Mount Vernon to spend their lunch hour, or a natural stopping point for people heading northwest on their way home after a day of work. Instead it’s a place for the homeless to kick around and for kids to hang out and drink.

The Deck and bench are badly in need of power washing and painting.

Hidden away though it is, we can’t believe that no one in city government knows about Round Falls. It’s directly adjacent to some of the city’s best new bicycle infrastructure, and there is even a bike rack placed at the top of it. With all of the planning and investment that’s gone into making Baltimore bike-friendly recently, we can only assume that this neglect is willful.

Round Falls is exactly the sort of asset that has the ability to urge people out of their cars and onto bicycles, and it’s a shame to see it going to waste this way.