You’ve likely driven past the Shamrock Inn a couple hundred times and said ‘Damn it, I always keep meaning to go in there.’ It’s a great neighborhood dive bar with a ton of character. And it comes by it honestly. It’s not a (ahem) boutique dive bar. Whatever the fuck that means. 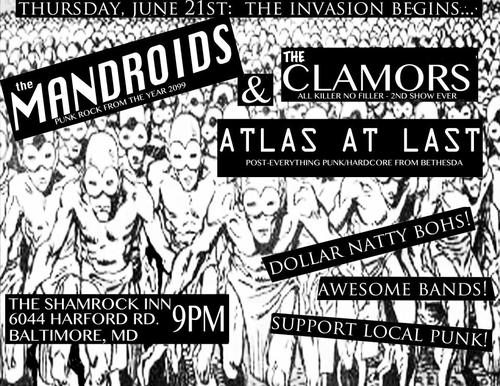 We’d love to be able to tell you something about any of these bands, but often when we write about music we’re drawing from our own personal knowledge. Since we don’t know these bands, and since no one has really bothered to write about them before and since they can’t even be bothered to fill in their own bios on their various social media pages we’re just going to say that the Mandroids and Clamors are Baltimore punk bands.

College Park/Bethesda’s Atlas At Last at least describes themselves as ‘post-everything,’ and we hate to break it to them but they are not post everything. They’re a good old fashioned mid-nineties style screamo band. And we mean that in the nicest possible way. The true and rightful heirs to The Monorchid? Time will tell.

If nothing else it’s great to see this kind of show billed anywhere that’s not the Sidebar. No knock on Sidebar, but a free punk show with dollar beers is something we’d like to see more of around town. A chance to get tinnitus and a beer buzz for less than $10 at your dad’s favorite bar is just another thing that makes Baltimore an amazing city.